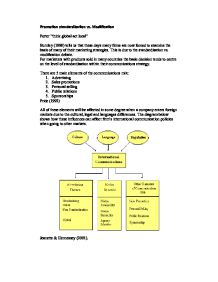 Promotion standardisation vs. Modification Porter "think global act local" Burnley (1998) tells us that these days many firms are now forced to examine the basis of many of their marketing strategies. This is due to the standardisation vs. modification debate. For marketers with products sold in many countries the basic decision tends to centre on the level of standardisation within their communications strategy. There are 5 main elements of the communications mix: 1. Advertising 2. Sales promotions 3. Personal selling 4. Public relations 5. Sponsorships Pride (1992) All of these elements will be affected in some degree when a company enters foreign markets due to the cultural, legal and languages differences. The diagram below shows how these influences can affect firm's international communication policies when going to other markets. Jeanette & Hennessey (2001). Numerous academics such as Jeannet & Hennessey (2001) state that in order for a company to launch a worldwide-standardised program certain conditions have to exist: 1. The overseas market is similar to the home market with limited cultural differences. ...read more.

Modification Despite the obvious advantages of a standardised communications strategy there exists a number of significant factors that impinge upon the effectiveness of such a strategy. As Kirpalani (1995) states, 'the cost efficiency of standardisation is obvious, but the effectiveness is not'. The increasing costs of media space and airtime, the increased fragmentation of media audiences and the intensification of competition for the attention of audiences, have all contributed to an increasing realisation that firms have to modify their communications mix when entering into foreign markets (Burnley 1998). Message constraints: Knowledge of culture is essential. It helps the firm anticipate how consumers in various markets are likely to respond to their actions. El Kahal (1994), "ignorance of cultural difference is not just unfortunate, it is bad business". There are considerable differences as to what is culturally acceptable in different countries of the world. * For example in France some adverts contain a lot of nudity, whilst in Arab countries not much flesh is visible. * Colours need to be changed to avoid 'taboos' in some countries (Kotler 2003) ...read more.

in programmes, ads must be at the end * In Germany competitions must not require any skill and must not require any proof of purchase. Coupons are forbidden whilst these are very popular in the USA Personal Selling Especially important for small firms. * Status of salesperson- Some countries they are well received, but in Western countries they are frowned upon * Whether to recruit locally or use ex-patriates * Gender Issues- cant speak to the woman in Arab countires Sponsorship * One of the most rapidly growing forms of promotion as its really useful for firms whose advertising is restricted. For example alcohol firms can advertise on football shirts * Sponsoring events with a global appeal e.g. Olympics. Bank Of Ireland sponsored Special Olympics * Product placement in films and TV programmes Internet * Knows no bounds. Easyjet offers its website in various different languages With the intensification of competition for the attention of foreign audiences whose cultures are remote from those of domestic markets, commonsense dictates that a "contingency" or "adaptation" approach would be the most useful as a competitive weapon (Burnley 1998). Porter "think global act local" ...read more.