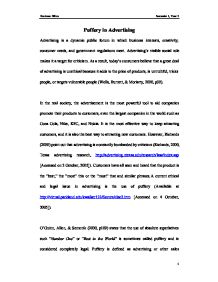 Puffery in Advertising Advertising is a dynamic public forum in which business interests, creativity, consumer needs, and government regulations meet. Advertising's visible social role makes it a target for criticism. As a result, today's consumers believe that a great deal of advertising is unethical because it adds to the price of products, is untruthful, tricks people, or targets vulnerable people (Wells, Burnett, & Moriarty, 2000, p30). In the real society, the advertisement is the most powerful tool to aid companies promote their products to customers, even the largest companies in the world such as Coca Cola, Nike, KFC, and Nokia. It is the most effective way to keep attracting customers, and it is also the best way to attracting new customers. However, Richards (2000) point out that advertising is constantly bombarded by criticism (Richards, 2000, Texas advertising research, http://advertising.utexas.edu/research/law/index.asp [Accessed on 2 October, 2005]). Customers have all seen and heard that the product is the "best," the "most" this or the "most" that and similar phrases. A current ethical and legal issue in advertising is the use of puffery (Available at http://virtual.parkland.edu/kwalker121/Secure/disc2.htm [Accessed on 4 October, 2005]). O'Guinn, Allen, & Semenik (2000, p109) states that the use of absolute superlatives such "Number One" or "Best in the World" is sometimes called puffery and is considered completely legal. Puffery is defined as advertising or other sales representations, which praise the item to be sold with subjective opinions, superlatives, or exaggerations, vaguely and generally, stating no specific facts (Wells, Burnett, & Moriarty, 2000, p34). Arens (1999, p50) states that puffery refers to exaggerated, subjective claims that can't be proven ture or false, such as "the best," "premier," or "the only way to fly." According to Aaker, Batra and Myers (1992, p536), puffery takes two general forms. The first is a subjective statement of opinion about a product's quality, using such terms as "best or greatest." The second form of puffery is an exaggeration extended to the point of outright spoof that is obviously not true. ...read more.