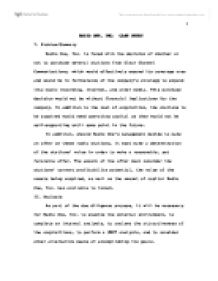 RADIO ONE, INC: CASE STUDY I. Problem/Summary Radio One, Inc. is faced with the decision of whether or not to purchase several stations from Clear Channel Communications, which would effectively expand its coverage area and would be in furtherance of the company's strategy to expand into music recording, internet, and other media. This purchase decision would not be without financial implications for the company. In addition to the cost of acquisition, the stations to be acquired would need operating capital as they would not be self-supporting until some point in the future. In addition, should Radio One's management decide to make an offer on these radio stations, it must make a determination of the stations' value in order to make a reasonable, yet favorable offer. The amount of the offer must consider the stations' current profitability potential, the value of the assets being acquired, as well as the amount of capital Radio One, Inc. has available to invest. II. Analysis As part of the due diligence process, it will be necessary for Radio One, Inc. to examine the external environment, to complete an internal analysis, to analyze the attractiveness of the acquisitions, to perform a SWOT analysis, and to consider other alternative means of accomplishing its goals. ...read more.

Therefore, the management of Radio One, Inc. is experienced and knowledgeable in their industry. In addition, management has made some solid business decisions in the past both regard to format and to expansion into new geographic areas. "By the end of 1996, WKYS had achieved a No. 2 ranking in Washington, and one of the acquired Baltimore stations, WERQ-FM, had become the No. 1 station in its market" (Ruback and Fischer, 2000, p. 2). Radio One has "pursued a clustering strategy within each market by acquiring two or more stations that target different demographic segments within the African-American population" (p. 2). Radio One, Inc. is also financially sound as a result of strong management. "Liggins and Royster worked together to cut costs and create efficiencies. Radio One centralized certain functions, including finance, accounting, legal, human resource management, information systems, and overall program management" (p. 2). Radio One, Inc.'s current ratio and quick ratio for 1997 and 1998 were 5.3 and 3.5, and 5.2 and 3.3, respectively. In addition, Radio One, Inc.'s asset utilization was .41 and .30 for 1997 and 1998. Though Radio One, Inc. suffered losses at the end of 1997 and 1998 which resulted in negative earnings per share, -.74 and -.31 in 1997 and 1998, the company had a positive net operating income prior to interest, taxes, and extraordinary items in both years. ...read more.

"The Internet-listening study suggested that broadcasters should look at acquiring not just conventional signals but also Netcasters; it added that they should look at using Internet audio to serve the uncovered format niches in their own markets" (Ross, Silberman, and Schiffman, 10/31/98, �13). Arbitron's survey indicated that internet usage was having a detrimental effect on both radio-listening and television-viewing and a majority of those surveyed indicated that they would be interested in subscribing to satellite radio and also in listening to out-of-town signals broadcast over the internet. (Ross, 10/31/98, �3). In addition, if Radio One, Inc. was to initially use its internet presence as solely a means of providing a community for its listeners and a venue for disseminating information, it would still be accomplishing much of what Arbitron's survey recommended: "a majority said they would listen to their current favorite station on the Internet, if it were available; and that radio stations were doing a good job of driving people to their World Wide Web sites. The study also cited considerable respondent interest in using a station's Web site to glean more info about a station's sponsors or even to buy products online" (Ross �3). Therefore, it would be in Radio One's best interest to expand its presence to include the internet, whether or not it decides to pursue the Clear Channel purchase. This would increase their coverage area and the size of the audience. ...read more.