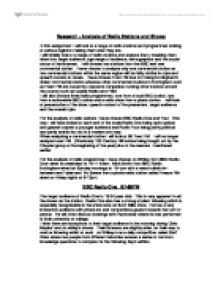 Research - Analysis of Radio Stations and Shows In this assignment I will look at a range of radio stations and programmes looking at various logistics making them what they are. I will initially look at a range of radio stations and analyse them, breaking them down into target audience, age range of audience, demographics and the social status of the listeners. I will choose two stations from the BBC and one commercial station. I have chosen to analyse only one commercial station as two commercial stations within the same region will be fairly similar in style and speech content et cetera. I have chosen Trent FM due to it being Nottingham's oldest commercial station whereas other commercial stations in Nottingham such as Heart FM are owned by corporate companies running other stations around the country such as Capital Radio and FXM. I will also choose three radio programmes, one from a local BBC station, one from a nationwide BBC station and a radio show from a pirate station. I will look at presentation of the show, speech content of the presenters, target audience and the overall style. For the analysis of radio stations I have chosen BBC Radio One and Four. This way I will have looked at each end of the scale-Radio One being quite upbeat and geared towards a younger audience and Radio Four being partly political and partly artistic-but not in a modern arts way. When analysing a commercial station I will look at 96 Trent FM. I will no longer analyse Heart FM. (Previously 106 Century FM before being bought out by the Chrysler group at the beginning of the year) due to the reasons I mentioned earlier. For the analysis of radio programmes I have chosen Jo Whiley from BBC Radio One- aired on weekdays at 10-11:45am. Mick Smith from BBC Radio Nottingham-aired on Sunday mornings at 10-1pm with a news bulletin in-between and Fyber and Nu Sense from a pirate radio station called Freeze FM-aired on Friday nights at 9-12pm. ...read more.

The target audience of commercial stations can be very broad, mainly because people within the region will listen. Local stations are played in many workplaces therefore you get a larger age range listening to the station. The adverts on Trent FM are also mainly companies within Nottingham; these companies being advertised on Trent FM are more likely to play their station as their adverts are played constantly throughout the day. In the evenings Trent FM due a regular chart show meaning their target audience would then be within the 16-24 age group. Many of the people listening throughout the day might not be listening because of a particular preference to Trent FM but because it is easy listening and local. Most of the presenters on Trent FM are from in and around Nottingham especially during the daytime and weekends. During the chart shows in the early evenings, media industry people will be involved meaning they may not be from Nottingham. The target audience of a commercial station will almost always depend on the region of the station. The target audience of Trent FM will have always been from Nottingham up until Digital Audio Band was introduced. Trent FM do promote their DAB station regularly which will mean their audience will now include people outside of Nottingham-although I do not think it will be nationwide due to other commercial stations in other regions being fairly similar in their overall layout. Trent FM is a very interactive station meaning local people will be the ones phoning in and talking on the shows. This also promotes the demographics being within Nottingham because other local people will relate to this and often talk about it with friends and family afterwards. This sort of thing promotes easy listening which is what people like. Trent FM will also have a large fan base; the station has been around since July 3 1975 when it was then called Radio Trent, changing its name to Trent FM in 1988. ...read more.

The target audience of Freeze FM will be the same more or less throughout the different shows. Their audience will be younger; 17-25 age range, although some older people will listen to this show also. These older people will be friends of the hosts who are of late 30's age and people who have been followers of the underground dance scene since a young age. Digital Audio Broadcasting In 1998 DAB was introduced to keep up with the changing world. It has progressed massively since then and as we now live in a digital world it seemed to be an inevitable transition from analogue radio. Although FM. AM and MW are still widely used DAB promised to give us a near CD quality of sound and new services-although people will still say that FM has much diversity when receiving a good reception offering hi-fi sound. Over 475 million people across the world now have access to 800 different DAB services now on offer. This is obviously a widely used service although I do not think it will supersede analogue just yet. Internet Radio Internet Radio is still being improved and updated all the time. With Internet radio it is now possible for anybody to set up a radio station. It is much cheaper to obtain a license and generally does not operate on a 24 hour, seven-day week basis. It also means that the content of the show will be the choice of the person or people running it. This means it will be very specialist and will stick to a certain genre. There are many websites devoted to educating people on Internet radio. Offering advice on what is needed to start it, ideas and inspiration and tips to make it achievable. Internet radio is rapidly increasing and getting better all the time. It offers a wide range of services and most importantly specialist stations rather than specialist shows which are included in radio stations operating on a 24/7 basis. ...read more.