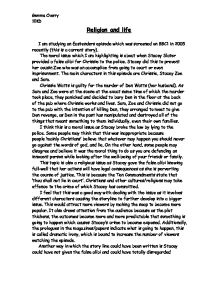 Religion and life I am studying an Eastenders episode which was screened on BBC1 in 2005 recently (this is a current story). The moral issue which I am highlighting is about when Stacey Slater provided a false alibi for Chrissie to the police. Stacey did this to prevent her cousin Zoe who was an accomplice from going to court or even imprisonment. The main characters in this episode are Chrissie, Stacey Zoe and Sam. Chrissie Watts is guilty for the murder of Den Watts (her husband). As Sam and Zoe were at the scene at the exact same time of which the murder took place, they panicked and decided to bury Den in the floor at the back of the pub where Chrissie works and lives. ...read more.

This is because the Ten Commandments state that 'thou shall not lie in court'. Christians and other cultures/religions may take offence to the crime of which Stacey has committed. I feel that this was a good way with dealing with the issue as it involves different characters causing the storyline to further develop into a bigger issue. This would attract more viewers by making the soap to become more popular. It also draws attention from the audience because as the plot thickens, the outcomes become more and more predictable that something is going to happen which causes Stacey's crime to become exposed. Additionally, the prologues in the magazines/papers indicate what is going to happen, this is called dramatic irony, which is bound to increase the number of viewers watching the episode. ...read more.

Over-65s make up just 18% of the audience. One-third of the EastEnders viewers are men. Eastenders and soaps in general are so popular because Soaps hold up a mirror to society. There is a pleasure in watching families and friends live out their lives, and we celebrate and fight with them, even if it is fictional. Strong acting performances, believable storylines and first class writing are the importance for a successful soap. Whatever the viewer's age, people want to be entertained by interesting stories with characters that they care about. Soaps are one of the only ways on TV where viewers can really get involved with a character. We want to realize that they have faults to, accept them and love them for it, as they're the same faults that we all have. ?? ?? ?? ?? Gemma Cherry 10KD ...read more.