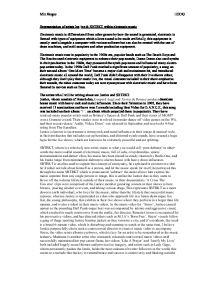 Representation of artists Jus�ice & SBTRKT within electronic music Electronic music is differentiated from other genres by how the sound is generated, electronic is formed with types of equipment which allows sound to be made artificially, this equipment is usually used alongside a computer with various software but can also be created with the use of drum machines, and midi samplers and other production equipment. Electronic music rose in popularity in the 1960s era, popular bands such as The Beach Boys and The Beatles used electronic equipment to enhance their pop sounds, Duran Duran also used synths in their production in the 1980s, they pioneered the synth pop scene and influenced many electro-pop artists today. In the 1990s Daft Punk reached a significant amount of popularity, a song on their second album 'One More Time' became a major club and mainstream hit, and introduced electronic music all around the world, Daft Punk didn't disappoint with their live shows either, although they don't play their music live, the visual elements included in their show emphasize their sounds, the robot costumes today are now synonymous with electronic music and have been featured in movies such as Tron. The artists who I will be writing about are Justice and SBTRKT. ...read more.

who approach life in a James dean-esque live fast, die young philosophy, this exhibits at their live shows where they perform in a larger than life manner, and is also evident in their music videos. In the music video for 'Stress', Justice caused uproar as the pounding Daft Punk-esque beat was accompanied by intense and aggressive visual which resulted in much controversy from the public, the director, Romain Gavras is recognised for his provocative videos, and has directed others such as M.I.A's 'Born Free'. Stress' visuals follow a gang of thugs sporting Justice bomber jackets as they terrorise a city, and it's residents, the result is a brutal 6-minute video, which is disturbing and stunning to watch at the same time, I believe Justice purposefully chose such a controversial director to create a music video to accompany Stress, the video raises albums eyebrows, which is key for an artist to be remembered in the music industry, Madonna is another artist who constantly released controversial music videos and successfully maintained her pop career flame, her videos 'Like A Prayer' and 'Justify My Love' both included hugely sexual themes and provocative imagery, and artists such as Lady Gaga, whom persistently pushes the limits, holds the most amount of twitter followers in the world, this seems to conclude that the key to remembrance and success is controversy and ...read more.

to the talking rather than him, as he would have produced the instrumental and wrote the lyrics, bu appears to be in the background of the music video, occasionally dj'ing in his trademark mask whilst Rose Gabour dances, this represents SBTRKT to be subtle, but powerful. To conclude, I believe both artists excel in the type of electronic music produce, Justice, write addictive melodies in their production and avoid the frat-boy market many electronic producers similar to Justice seem to follow, where there is a huge element of macho-ism being reflected, for example artists such as Skrillex who also include metal influences has seemed to have wandered away from the ethos of electronic music, where he and other electronic producers alike have developed a new ethos where it's constantly a struggle to create to most filthiest bass sound, but in effect, the sound they produce occurs so often in modern electronic music that It almost appears to be bland and repetitive, Justice has maintained a unique element in their music, and produced a diverse musical style, the duo constantly keep up with the ever-changing electronic genre, but also add their own flair to it, as with SBTRKT who has developed a hugely unique musical style which I predict will take the UK music scene by storm very shortly. ?? ?? ?? ?? Miz Haque 12JOG ...read more.