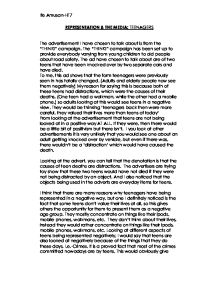 REPRESENTATION & THE MEDIA: TEENAGERS The advertisement I have chosen to talk about is from the "THINK!" campaign. The "THINK!" campaign has been set up to provide everybody varying from young children to old people about road safety. The ad have chosen to talk about are of two teens that have been knocked over by two separate cars and have died. To me, this ad shows that the form teenagers were previously seen in has totally changed. (Adults and elderly people now see them negatively) My reason for saying this is because both of these teens had distractions, which were the causes of their deaths, (One teen had a walkman, while the other had a mobile phone.) ...read more.

I also think that those people who have never really had a negative view to teens will now start to have a negative view, and more people will be cautious, especially when it comes to crimes. Behaviour towards teens will now change, police will not take crimes committed by teens lightly anymore, and others will not treat teens as young children anymore, more responsibilities will be put onto them, and more pressure to ensure that they are under control and behave in an appropriate way. Looking at the advertisement I am sure that teens will also be on alert to ensure that they are safe at all times, especially those who care for their lives. ?? ?? ?? ?? Ife Amusan-HT7 ...read more.