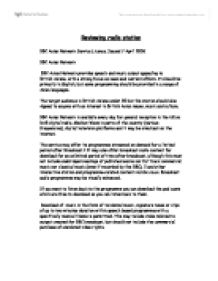 British Asians, with a strong focus on news and current affairs. It should be primarily in English, but some programming should be provided in a range of Asian languages.

Appeal to anyone with an interest in British Asian issues, music and culture.

BBC Asian Network is available every day for general reception in the UK on DAB digital radio, Medium Wave in parts of the country (various frequencies), digital television platforms and it may be simulcast on the internet.

The service may offer its programmes streamed on-demand for a limited period after Broadcast.1 It may also offer broadcast radio content for download for an unlimited period of time after broadcast, although this must not include unabridged readings of published works nor full track commercial music nor classical music (even if recorded by the BBC), 2 and other interactive station and programme-related content via bbc.co.uk. Broadcast audio programmes may be visually enhanced.

Download of  music in the form of incidental music, signature tunes or clips of up to two minutes duration within speech based programmes with a specifically musical theme is permitted .This may include video related to output created for BBC broadcast, but should not include the commercial purchase of unrelated video rights.

BBC Asian Network programmes  exhibit all of the following

BBC Asian Network should deliver its remit through an approximately 50:50 split of

music and speech, with the precise balance varying over the course of the week.

Speech output should include a strong focus on accurate, impartial and independent

news and current affairs, together with debate, drama, entertainment and sport.

The music played should include a broad range of South Asian-influenced music, with

a particular emphasis on new and live music and British Asian artists. During the day

an extensive playlist should form the backbone of the schedule, while evening and

those who wish to develop their knowledge.

visual enhancements and listeners should be encouraged to interact and communicate

with each other and the station. BBC Asian Network should use new technologies to

programmes as and when they want.

some output from independent producers.

5. Contribution to the promotion of the BBC’s public purposes

amongst its audience, primarily through its strong focus on accurate, impartial and

develop a greater understanding of UK and international events. Listeners should be

encouraged to explore a broad range of subjects, to share their experiences, and to

be offered regular opportunities to engage in debate. BBC Asian Network should also

providing in-depth analysis on issues relevant to the audience.

its audience by providing a platform for new and established British Asian talent.

In its music output, BBC Asian Network should cover a wide range of genres with an

emphasis on new music and on nurturing and developing new acts. Through its

The station should find and develop new production and presentation talent.

• Ensure that at least 40% of the music in daytime4 is from UK artists. each

terms of geography, interests, ethnicity, and religion. It should stimulate, support and

reflect the diversity of cultural activity in the UK, within the defined scope of the

As a UK-wide, rather than local, service it is aimed at the whole UK Asian population,

the UK, giving a broad and fair view of them, reflecting them back to themselves and

to the wider community. Its news and current affairs should reflect the voices of the

and reflect opinion from around the UK. Programmes in Hindi/Urdu, Bengali,

Gujarati, Mirpuri and Punjabi, should seek to connect listeners with each other, and

with their cultural and linguistic roots.

A broad range of music should be played, encouraging listeners to appreciate music

from communities and cultures they may never have come across before. BBC Asian

with each other and with their spiritual roots. The station should also play a role in

Network audience, bringing people together to participate in related programmes and

communities of interest, providing forums for online communities where they can

discuss the news and set their own agenda.

5.4 Bringing the UK to the world and the world to the UK

BBC Asian Network should contribute to this purpose amongst its audience,

primarily by bringing the world to the UK. Its news and current affairs output should

regularly cover international events and issues. The station should give the audience

through phone-ins, simulcasts, live link-ups, and use of guests from other countries, as

well as through its online communities. The station should regularly use its

relationship with communities around the world, particularly in the Indian sub-

continent, to help British Asians connect with their roots.

should reflect the particular interests of British Asians.

audience, primarily by providing opportunities for informal learning. Its language

programming should be aimed at listeners who may speak English as a first language. It

should aim to link British Asians with their linguistic roots in an engaging way.

when they are relevant to the station’s audience.

purposes, helping to deliver to the public the benefit of emerging communications

technologies and services and, in addition, taking a leading role in the switchover to

of ways which are described in this Service Licence.

6. Annexes to this Licence

framework described in Annex I. BBC Asian Network’s compliance with any

Conditions, as described in section 5, will also be measured on an annual basis and

reported in the Annual Report and Accounts.

described in sections 4 and 5 of the Service Licence. The BBC Trust will monitor

compliance with these commitments retrospectively as part of its periodic service

7. Operation of this Service Licence by the BBC Trust

For details of how the BBC Trust operates this Service Licence, please see the

Service Licence Operating Framework. This is available from www.bbc.co.uk/bbctrust

or upon request from the BBC Trust Unit.

7 For all BBC services

account for its performance.5 It will use the framework described below as the basis

for its assessment of BBC Asian Network.

The framework is based around the four drivers of public value: Reach, Quality,

Reach: BBC Asian Network should contribute towards the maintenance of combined

particularly amongst its stated target audience.

It should contribute towards on-demand consumption of content. This will be

measured by weekly reach of non-DRM audio downloads over the internet.

Quality: audience approval of BBC Asian Network and perceptions of it as high quality

and innovative. Also, the proportion of originated programmes across all hours8

of BBC Asian Network as engaging and challenging.