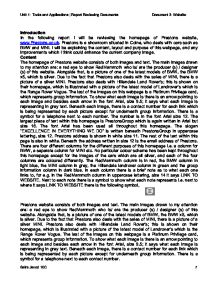 Introduction In the following report I will be reviewing the homepage of Prestons website, www.Prestons.co.uk. Prestons is a showroom situated in Colne, who deals with cars such as BMW and MINI. I will be explaining the content, layout and purpose of this webpage, and any improvements which I think could enhance the current company image. Content The homepage of Prestons website consists of both images and text. The main images drawn to my attention are: a red eye to show RedMammoth who is/ are the producer (s) / designer (s) of this website. Alongside that, is a picture of one of the latest models of BMW, the BMW x5, which is silver. Due to the fact that Prestons also deals with the sales of MINI, there is a picture of a silver MINI. Prestons also deals with Hillendale Land Rover's; this is shown on their homepage, which is illustrated with a picture of the latest model of Landrover's which is the Range Rover Vogue. The last of the images on this webpage is a Platinum Privilege card, which represents group information. To show what each image is there is an arrow pointing to each image and besides each arrow in the font Arial, size 9.5; it says what each image is representing in grey text. ...read more.

The slogan "EXCELLENCE IN EVERYTHING WE DO" is written beneath PrestonsGroup in uppercase lettering, size 12. Prestons address is shown in white size 11. The rest of the text within this page is also in white. Beneath the address written in size 12 is the email address of Prestons. There are four different columns for the different purposes of this homepage i.e. a column for BMW, a separate column for MINI etc. No particular colour scheme has been kept throughout this homepage except for the images of the cars which are all silver, and each of the four columns are coloured differently. The RedMammoth column is in red, the BMW column in light blue, the MINI column in grey, the Hillendale landrover column in green and the group information column in dark blue. In each column there is a brief note as to what each one links to, for e.g. in the RedMammoth column in uppercase lettering, size 14 it says LINK TO WEBSITE. Next to each note there is a symbol to show what each note represents i.e. next to where it says LINK TO WEBSITE there is the following symbol, In the BMW column there are three different symbols one is a tick to show the link for approved used BMW cars, as follows; the second is the following symbol ; ...read more.

Prestons website is used particularly to advertise BMW, MINI and Hillendale Land Rovers; these are the cars Prestons deal with. Prestons homepage is also advertising the producer/ designers of this website RedMammoth. It also informs others of its offers and it clearly indicates on it's homepage of its whereabouts. Again, this is used to enhance the company image. Evaluation After careful examination of this homepage I have come to the conclusion that Prestons website clearly informs others of its company, and it's widely available offers. This is done by the use of eye-catching images and the use of not too much text which would clearly 'put-off 'the viewer/ reader. The producer/designer has used a wide range of colours which makes this website more eye-catching than others. Improvements After evaluating this homepage I have found that even though there are many features which portray professionalism there could still be many improvements. Firstly they should remove the three rectangles in the three columns as I find that there is no need for them as they look different to the rest of the columns, and they should have a particular colour theme as it would give the company a professional image. This homepage has potential; however these minor improvements would enhance the current company image. Unit 1: Tools and Applications | Report Reviewing Documents Document 3: Website Saira Javed 10C 7 ...read more.