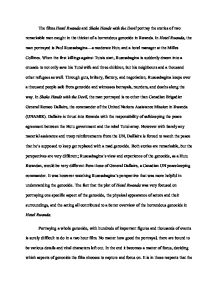 Rwandan Comparison. The films Hotel Rwanda and Shake Hands with the Devil portray the stories of two remarkable men caught in the thicket of a horrendous genocide in Rwanda.

The films Hotel Rwanda and Shake Hands with the Devil portray the stories of two remarkable men caught in the thicket of a horrendous genocide in Rwanda. In Hotel Rwanda, the man portrayed is Paul Rusesabagina-a moderate Hutu and a hotel manager at the Milles Collines. When the first killings against Tutsis start, Rusesabagina is suddenly drawn into a crusade to not only save his Tutsi wife and three children, but his neighbours and a thousand other refugees as well. Through guts, bribery, flattery, and negotiation, Rusesabagina keeps over a thousand people safe from genocide and witnesses betrayals, murders, and deaths along the way. In Shake Hands with the Devil, the man portrayed is no other than Canadian Brigadier General Romeo Dallaire, the commander of the United Nations Assistance Mission in Rwanda (UNAMIR). Dallaire is thrust into Rwanda with the responsibility of safekeeping the peace agreement between the Hutu government and the rebel Tutsi army. However with barely any material assistance and troop reinforcements from the UN, Daillaire is forced to watch the peace that he's supposed to keep get replaced with a mad genocide. Both stories are remarkable, but the perspectives are very different; Rusesabagina's view and experience of the genocide, as a Hutu Rwandan, would be very different from those of General Dallaire, a Canadian UN peacekeeping commander. ...read more.

It offered small snippets of what was happening outside of the Milles Collines and largely left it up to the viewer to research more or imagine what happened. Shake Hands with the Devil touches too many aspects and too many different characters that in the end, those additions and extra portrayals took away from the core depiction of Dallaire. The physical appearance of the actors also was a point where the two films differed. Paul Rusesabagina in Hotel Rwanda was portrayed by Don Cheadle whereas Romeo Dallaire was portrayed by Roy Dupuis in Shake Hands with the Devil. Because both characters are figures that actually exist in real life, the physical appearance of the actors is significantly important in how the viewer interprets and takes in these characters. The actors, even though they don't have to look exactly like the figures they're portraying, should give off a similar impression and aura. In these respects, Don Cheadle's physical appearance not only gives off an impression and aura that is very much like the one given off by the real Rusesabagina, but it also highlights and strengthens Rusesabagina's accomplishments. Don Cheadle's appearance suits what viewers expect of a hotel manager-not too extraordinarily handsome or charismatic or well-built. ...read more.

This is in stark contrast to the different aspects of Rusesabagina we see in Hotel Rwanda. Roy Dupuis' acting seems very one-dimensional and impersonal, and the viewer cannot connect much with Dallaire through such a portrayal. In the end, Don Cheadle's portrayal of Rusesabagina in Hotel Rwanda helps in offering a much more real portrayal of the Rwandan genocide. Dupuis' acting lacks the connecting points that are offered by Cheadle's portrayal and the depiction of the Rwandan genocide in Shake Hands with the Devil seems much more impersonal and one-dimensional. Hotel Rwanda and Shake Hands with the Devil are both films that tell the stories of two remarkable men caught in the thicket of a horrendous genocide in Rwanda. In terms of focus, physical appearance, and acting, it is Hotel Rwanda that offers the viewer a better insight into the Rwandan genocide. Hotel Rwanda's direct focus on Paul Rusesabagina and the Milles Collines, the well fitting physical features of Cheadle, and his multi-faceted acting all contribute to Hotel Rwanda's excellent viewing experience. It is without a doubt that both films depicted a subject matter that is very hard to portray in a film. However it was the more personal portrayal that provided many connecting points for the viewer that made Hotel Rwanda more attractive and a better portrayal of the Rwandan genocide. ...read more.