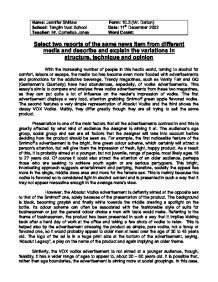 Select two reports of the same news item from different media and describe and explain the variations in structure, technique and opinion.

Name: Jennifer Shirlaw Form: 10.3 (Mr. Dalton) School: Tanglin trust School Date: 11th December 2002 Teacher: Mr. Cornelius Jones Word Count: Select two reports of the same news item from different media and describe and explain the variations in structure, technique and opinion With the increasing number of people in this hectic world, turning to alcohol for comfort, leisure or escape, the media too has become even more flooded with advertisements and promotions for the addictive beverage. Trendy magazines, such as Vanity Fair and GQ (Gentleman's Quarterly) have had abundances, especially, of vodka advertisements. This essay's aim is to compare and analyse three vodka advertisements from these two magazines, as they can put quite a lot of influence on the reader's impression of vodka. The first advertisement displays a very loud, attention grabbing Smirnoff green apple flavored vodka. The second features a very simple representation of Absolut Vodka and the third shows the classy VOX Vodka. Visibly, they differ greatly though they are all trying to sell the same product. Presentation is one of the main factors that all the advertisements contrast in and this is greatly affected by what kind of audience the designer is aiming it at. The audience's age group, social group and sex are all factors that the designer will take into account before deciding how the product should be seen as. ...read more.

The designers obviously tried to make it look as apple flavored and twisted as possible, which relates to product directly, but also relates indirectly to parties or enjoyment, portrayed by the cocktail glass. This cocktail is not the actual vodka but is a mixture of ingredients that include the product that is trying to be sold and that is possibly why the page is split into two sections, dividing the end result from the ingredient, almost like a product illustration. Unlike the other two advertisements, Absolut vodka can be described and interpreted with one word and that is 'simplicity'. The colour scheme, fonts, logo and layout are all very simple, but effectively present the product. The whole point in this is to portray the vodka as truly a 'legacy' in being just that, vodka. As mentioned before, there is nothing really special or fancy about this vodka that the designers could use as an effectively striking marketing ploy. Instead they successfully catch its simplicity in a positive, pure light so that it could appeal to the specified audience. The advertisement will reflect, as the bottle is on the glassy tabletop it is photographed on, the simple life that some people crave and so it will appeal to them and they will be more likely to buy the product. ...read more.

In the case of the Smirnoff advertisement this may be controversial as it is flavored and it's bright colour scheme gives a light impression, but it actually has a very high alcohol content. This wrong impression could be potentially dangerous. Due to their different target audiences, the way they have presented their product also differs drastically. They also seem to repeat and stress the same theme/themes so that people will associate that with the product. For example, the Smirnoff advertisement gives the loud, vibrant impression of fun and entertainment often associated with parties, therefore a good persuasion tactic for it's young, single target audience. The Absolut advertisement, however, seems to be aimed more at older, office workingmen, so it has a constant theme of simplicity that they would see as a solitary escape from their stressful lives. The VOX vodka tries a different marketing ploy and presents the product as more of a style for classy people, rather then an addictive, dangerous drink. They victimize na�ve people who strive to exactly that and this is how they sell product. The main thing that should be remembered is that the main focus is to strike the attention of people to sell their product, which happens to be very dangerous, and the cause of many accidents and deaths. All three of the advertisements try to influence the audience into forgetting that and to focus on the positive side of vodka. ...read more.