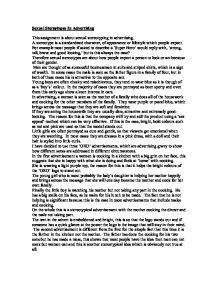 Sexual Stereotypes In Advertising This assignment is about sexual stereotyping in advertising. A stereotype is a standardized character, of appearance or lifestyle which people expect. For example most people if asked to describe a 'Super Hero' would reply with, 'strong, tall, brave and good looking,' but is this always the case? Therefore sexual stereotypes are about how people expect a person to look or act because of their gender. Men are thought of as successful businessmen in suits and striped shirts, which is a sign of wealth. In some cases the male is seen as the father figure in a family of four, but in both of these cases his is attractive to the opposite sex. Young boys are often cheeky and mischievous, they tend to wear blue as it is though of as a 'boy's' colour. In the majority of cases they are portrayed as been sporty and even from this early age show a keen interest in cars. In advertising, a woman is seen as the mother of a family who does all of the housework and cooking for the other members of the family. They wear purple or pastel blue, which brings across the message that they are soft and feminine. If they are acting the housewife they are usually slim, attractive and extremely good-looking. ...read more.

The father figure, in the scene is just reading his newspaper and the fact that he is doing nothing else is a stereotypical idea of a father waiting for his dinner. All of the family is smiling as they receive their dinner and this is because they are about to receive 'OXO' gravy, which brings across the message that it is good. The way in which the advertisement uses both male and female characters in a stereotypical form is important because it sets a common family scene and people think that it also applies to their family. On the whole all three of the advertisements used both male and female characters and I think that is because the product is for both sexes but I also think that even though this is the case women are still portrayed as the cook. There are some adverts, which use only male models, and these usually advertise products such as cars, aftershave, DIY products and shaving equipment. One example of an advert, which uses just a male character, is advertising Hugo Boss Aftershave. The man in the advert is brought across as a successful businessman and we can tell this by the way he dresses. I think that the striped shirt, which he is wearing, is a sign of wealth and success. ...read more.

The second television advertisement that I have chosen is advertising an insurance company, which is just for women. The company says the if you chance your insurance to them it could be cheaper because it is just for women. This brings across a stereotypical image that males, young and old, are dangerous drivers who push their car it its limits. This of cause is untrue and there, as just as many bad female drivers as there are bad male drivers. In the advertisement there is a women who is presenting the information and the company logo contains the colour pink, these two points are significant if the company wants to keep with the idea that women are better drivers. The reason for this is that the people who are watching the advertisement will be getting the information from another women, which they will probably value more. Pink is a stereotypical colour which as always been associated with females of every age. Both of these advertisements express stereotypical images of men and women in completely different ways, but these are just a small selection of the many ways men and women are portrayed. The roles of men and women have changed considerably over time, but in peoples sub-conscious they appear to have stayed the same and therefore have also not changed in advertising. For example most males are portrayed most successful businessmen and nowadays women go to work rather than staying at home doing the housework. ...read more.