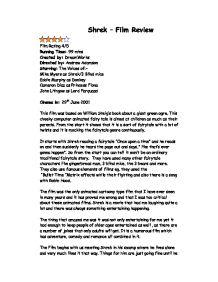 Shrek - Film Review Film Rating 4/5 Running Time: 99 mins Created by: DreamWorks Directed by: Andrew Adamson Starring: The Voices of:- Mike Myers as Shrek/3 Blind mice Eddie Murphy as Donkey Cameron Diaz as Princess Fiona John Lithgow as Lord Farquaad Cinema in: 29th June 2001 This film was based on William Steig's book about a giant green ogre. This cheeky computer animated fairy tale is aimed at children as much as their parents. From the start it shows that it is a sort of fairytale with a lot of twists and it is mocking the fairytale genre continuously. It starts with Shrek reading a fairytale "Once upon a time" and he reads on and then suddenly he tears the page out and says," like that's ever gonna happen". So from the start you can tell it won't be an ordinary traditional fairytale story. They have used many other fairytale characters like gingerbread man, 3 blind mice, the 3 bears and more. ...read more.

The plot is easy enough to follow and it is very unpredictable with enough twists to keep us entertained. The characters looked extremely realistic unlike other animated films and the character who looked most realistic was none other than Princess Fiona (Voice by Cameron Diaz). I thought that she resembled Cameron Diaz quite well. Shrek was quite a sad unhappy ogre who had covered up his real feelings in all his life but now slowly he is letting it out and soon you start sympathising with him. The funniest character had to be the donkey with his continuous snide remarks about Shrek. It had a sort of fairytale rhythm to it as they had to rescue a princess from a castle and have to slay the dragon in the process. But soon the traditional fairytale elements had been twisted and the prince became Shrek rather than a handsome young man. Shrek had shook the princess awake and took his on his shoulder rather than a kiss to awake her. ...read more.

All the other ones were serious and this was a very different type of film. He did a good job at making Shrek very unique and enabling it so it has a wide range of audiences. I have to say that the songs in the movie were exceptional. The music helps hugely to create atmosphere in the film and the dancing is very realistic and it all looks very professional. The music itself sounds very nice. The ending was quite predictable however the way it ended in a karaoke was excellent showing us that the film had a happy ending like a normal fairytale but then had it's own unique way of ending unlike other fairytales or normal movies. The reason I rated it 4 out of 5 is that I think the ending was quite rushed and I would've wanted to see Shrek and Fiona's married life to see if they got on even if the film had to run for longer. But I assume that they will show all that in the sequel if there is one, "Shrek2". Zakir Md. Hussain 10TR ...read more.