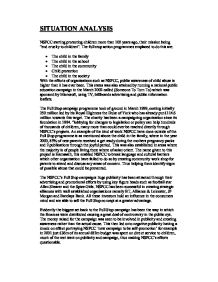 SITUATION ANALYSIS NSPCC starting protecting children more than 100 years ago, their mission being "end cruelty to children". The full stop action programmes emplaced to do this are: * The child in the family * The child in the school * The child in the community * Child protection * The child in the society With the efforts of organisations such as NSPCC, public awareness of child abuse is higher than it has ever been. This states was also attained by running a national public education campaign in the March 2002 called (Someone To Turn To) which was sponsord by Microsoft, using TV, billboards advertising and public information leaflets. The Full Stop campaign programme took of ground in March 1999, costing initially 250 million led by his Royal Highness the Duke of York who has already put �114.6 million towards this target. The charity has been a campaigning organisation since its foundation in 1884. "lobbying for changes to legislation or policy can help hundreds of thousands of children, many more than could ever be reached directly through NSPCC's projects. An example of the kind of work NSPCC have done outside of the Full Stop programme is as mentioned above the child in the family, where in the year 2000, 85% of new parents received a get ready during the mothers pregnancy packs and 2 publications through the joyful period. ...read more.

STRATEGY Short term (0-1yrs) � Market Penetration � Communicate issues to potential major supporters and cement existing relationships with stakeholders Like the objectives we have dissected our strategic options into three stages. Whilst we hope to decrease other promotional campaigning, we want to concentrate on acquiring new members. At this early stage we hope to increase the flow of information to not only our supporters but to our stakeholders. By informing the press and government bodies we are aiming to become closer with our enemies to avoid past problems NSPCC have incurred with negative publicity. Mid-term (1-3yrs) � To generate an integrated sponsorship with telecommunication companies � Concentrate on the communication process and building relations to promote the development and affairs of the children At this stage we hope to attract and acquire a major telecommunications supporter to introduce different levels of technologies and interaction with our members. Also there is further emphasis in communicating our primary goals to stakeholders. Long term (3+ yrs) � Continually build, update and enhance database � Tailor emotive letters groups greatest leverage points In the longer term it is vital that we maintain a good quality database system because this is the core base for effective direct marketing efforts. Also we hope to consistently follow up leads with letters and other market communications tools. ...read more.

We will also work closely with the press and ensure that we have as much positive press coverage as possible. * MONITOR THE USAGE OF THE WEBSITE We hope to achieve this by asking visitors to the site to fill in a form that gathers details such as name, address, telephone number etc. By doing this we hope to tailor the site to the customers as best as we can and sending as much relevant information as possible. Control After the tactics, strategies, and actions, these are how we control the campaign: * Events - follow up lead We are going to approach and encourage the audience and potential customers to join us since they might be aware of the campaign after the events that we have already held. And their registration will be useful for us as the details of customers. * Monetary analysis This is where we analyze and handle the monetary flows, by allocating the budget precisely in order to avoid overspending. * Direct link and membership with direct marketing sources This is to find out how our supporters, existing customers, and potential customers are aware about the campaign, which means what direct marketing tools are effective or ineffective. * Feedback from pitches This is to find out how successful the campaign is and how we can improve it by giving out the feedback form to customers and supporters. ...read more.