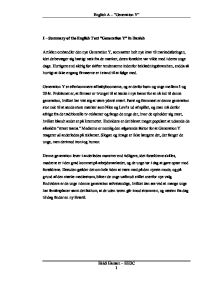 Summary of the English Text

new so-called Generation Y, which is a huge part of our target group, is a lot different from the previous Generation X. The new generation consists of children and youngsters between five and twenty years, and they have grown up with a whole new technology as well as completely different family patterns. It is also a fact that this generation is more racially diverse, and that it is constantly being overwhelmed by commercials, which all together are important facts that influence young people making decisions on what to buy. As we all memorize, demographics caught up with the jeans industry in the early 1980s, and that was probably because of the aging baby boomers which as you know were our great target group. All at once, their taste changed along with their age, and the segment of young people most likely to buy jeans, was shrinking. Subsequently, we sought growth through mass-marketing strategies, substantially increased our advertising and sold through mass retailers, but when we realized that these things did not solve any problem, we tried with diversification into faster-growing fashion. When we afterwards made an effort on diversification into specialty apparel businesses, profits collapsed, so we are that much wiser now, seeing that slapping our famous name on everything is not a useful solution when we cannot sell our jeans in sufficient quantities. We must keep doing what we are best at; making and selling jeans. ...read more.

Moreover, youngsters of the new generation want to look individual having their own style and therefore, we cannot keep manufacturing plain blue jeans; what young people want are more than one type of jeans. That means that we have got to focus on tailoring the products and campaigns to each individual person and each individual region, where to we can hire people to do PR in every single country. If we do that, they can be responsible for publicity and arranging events. I believe that we are able to go far with this project, and our main objective would be to sell different collections to different types of youngsters, including expand the collections little by little. Thus, we are obliged to look more forward and gain knowledge of the persons to whom we want to sell our products, and for that reason we must learn to think like them. We have to realize that our heydays are over, and that we have to work our way to the top all over again, simultaneously, while we are required to be attentive in potential changes of young people's habits. If we are able to handle the situation that we are in the middle of now, we are strong enough to handle almost everything, and that is why we must do every possible thing to accomplish our goals for the future, because we need to succeed now more than ever. Heidi Hansen Chief of Marketing ?? ?? ?? ?? English A - "Generation Y" Heidi Hansen - HH3C 1 ...read more.