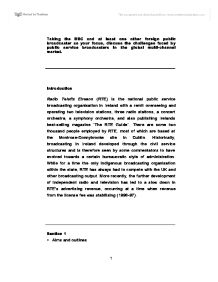 Taking the BBC and at least one other foreign public broadcaster as your focus, discuss the challenges faced by public service broadcasters in the global multi-channel market.

Taking the BBC and at least one other foreign public broadcaster as your focus, discuss the challenges faced by public service broadcasters in the global multi-channel market. Introduction Radio Telefis Eireann (RTE) is the national public service broadcasting organisation in Ireland with a remit overseeing and operating two television stations, three radio stations, a concert orchestra, a symphony orchestra, and also publishing Irelands best-selling magazine `The RTE Guide`. There are some two thousand people employed by RTE, most of which are based at the Montrose-Donnybrooke site in Dublin. Historically, broadcasting in Ireland developed through the civil service structures and is therefore seen by some commentators to have evolved towards a certain bureaucratic style of administration. While for a time the only indigenous broadcasting organisation within the state, RTE has always had to compete with the UK and other broadcasting output. More recently, the further development of independent radio and television has led to a slow down in RTE's advertising revenue, occurring at a time when revenue from the license fee was stabilising (1996-97). Section 1 * Aims and outlines At the beginning of the twenty-first century, terrestrial broadcasters, in particular those who operate as public service broadcasters, find themselves having to exist within an ever increasing commercially driven market. I hesitate to use the word `market` as it gives rise to issues that, it could be argued, operate outside of the `public interest`. However, the reality is that in order that public service broadcasters are to remain both relevant and pluralistic in their nature, they must, it has been suggested, adopt (and attempts have been made as we shall see) a more market driven structure and ethos. One of the fundamental issues for those who argue for and against public service broadcasting is the increasingly ambiguous term itself. What is it that constitutes broadcasting that operates in the `public interest` or `public good`, especially when considering the ever-growing fragmentation of society? ...read more.

However, what it does do is provide a common domain, arguably important in the context of social interaction. The ability of the audience to discuss for example, the previous night's episode of Eastenders (BBC1) in the playground or at work should not be underestimated. It could be argued that a wider range of viewing could bring a greater level of social ideas and concepts, yet this ignores the `information rich/information poor` argument, and the resulting divide which has yet to be addressed. The digression by both RTE and the BBC into digital media does not, in the current climate, resolve the problem of catering for such a large audience on a limited broadcasting frequency, simply because digital television is not widespread enough at this time. The conundrum for both organisations therefore, is that in order that they become both more diverse and competitive, their energies must go into the creation and promotion of their digital services so as to have a foothold in the future of digital broadcasting. And here lies the rub, At the moment there does not exist a platform solely intended for the broadcast of the BBC's digital programmes. It is available through NTL, Sky and ITV Digital, and therefore, the BBC is indirectly promoting the formats that have reduced their audience share and contributed to calls for its privatisation. The argument hinges on how the PSB's intend to supply their digital services in the future. They may provide a set-top box through which their channels can be received, or fund their place on the current EPG (Electronic Programme Guide), available through SkyDigital. RTE will begin broadcasting on the SkyDigital platform from April 2002, which has emphasised its intention to fulfil its public service remit by extending its audience reach to as many parts of Ireland as possible. However both NTL and Chorus, (cable companies operating in Ireland) have complained that RTE paid a reported �6 million for its inclusion on the SkyGuide EPG (Electronic Programme Guide), whereas RTE is hosted for free, and importantly, compulsorily by the two cable operators. ...read more.

Public perception of PSB is hindered because we have no solid definition from which to lever our thoughts and make informed decisions, and therefore are left a little confused as to the nature and position of public service broadcasters. In section 3 I discussed the main competition to the public service broadcasters with a view to the future, rather than placing emphasis on the current situation. I decided upon this route because it is the future of broadcasting at the PSB's preparation for it, which distinguishes it from other broadcasters. The competition to public service broadcasting, especially in the UK is relatively new and is therefore able to make the transition more smoothly. As I have stated, the BBC carries a weight of history unlike any other broadcasting organisation in the world, and therefore has to make its moves slowly and steadily. It is helped in this progression by its license fee revenue and its continual expansion into the commercial sector, something RTE recognises as its own potential future. However RTE's efforts are compromised by the down turn in advertising revenues, and the fact that its license fee is not consumer price index linked. The advertising sector is not a stable form of income, therefore the license fee must form its core funding. But with commercial revenues forming 65% of its funding, the probability of RTE moving towards a future in which it is both relevant and competitive is unlikely. In this study, I have attempted to outline and investigate the most current social and political issues surrounding public service broadcasting in Ireland and in the UK, using key texts, the Internet (which has proved invaluable), and also by contacting RTE and the BBC for their help and guidance. It is safe to say that I did not have enough room to cover all the topics that I had intended to cover, although I have a fairly comprehensive appendix which has information concerning issues I have touched on and have investigated in more depth. ?? ?? ?? ?? 1 4 ...read more.