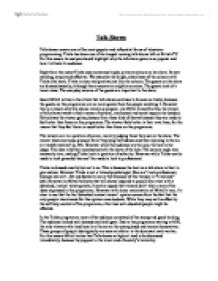 Talk Shows Talk shows remain one of the most popular and influential forms of television programming. Trisha has been one of the longest running talk shows left on British TV. For this reason its analysis should highlight why the talk show genre is so popular and how it attracts its audience. Right from the outset Trisha uses numerous bright, primary colours on her show. Its eye-catching, simple and effective. We associate the bright, cleanliness of the colours with Trisha (the host). Trisha is clear and positive just like the colours. The guests on the show are dressed casually, although there accents are slightly common. The guests look of a lower class. The everyday natures of the guests are important to the show. Jason Mittell writes in his article that talk shows continue to be seen as trashy, because the guests on the programme are no more special then the people watching it. ...read more.

Trisha is dressed smartly but not to so. This is because the host on a talk show is their to give advice. However Trisha is not a trained psychologist. She can't look professional, because she isn't. Abt and Seeholtz worry that because of this therapy is "trivialised" (ab). However as Mittell believes that talk shows respond to people who view with a detached, ironical viewing style, It can be argued that viewers don't take in any of the ideas expressed in the programme. However with closer examination of Mittell's text, it's clear to see that the the 'detached ironical viewer' opinion comes from the fact that the only people interviewed for this opinion was students. While they may not be effect by the self-help content of the programme, other less well educated people might be effected. In the Trisha programme most of the audience consisted of the young and good-looking. ...read more.

The article itself refers to only American talk shows. Britain and America have different cultural and ideological views and so it can't be assumed that ideas on American ideologies can be used to as being the same as British people. The article also fails to have any textual analysis of talk shows. Due to the lack of textual analysis it relies on a sample to formulate opinions of the programmes. However the sample used is small and of only one demographic; students. Their opinion can not be construed as being the set opinion of viewers everywhere. In conclusion through my analysis of Trisha its clear to see that the way things are done on the programme are to appeal to its audience. The viewer enjoys the programme because as Mittel writes they like to feel superior to the guests on it. They judge the guests on the show and then feel superior to them because there lives are not as bad as those on the show. http://www.findarticles.com/p/articles/mi_m0SOR/is_1_62/ai_73692417 ...read more.