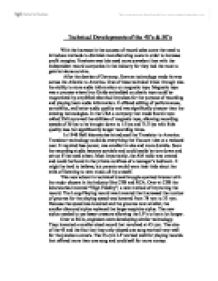 Technical Developments of the 40's & 50's With the increase in the success of record sales came the need to introduce methods to diminish manufacturing costs in order to increase profit margins. Nowhere was this need more prevalent than with the independent record companies in the industry for they had the most to gain let alone survive. After the demise of Germany, German technology made its way across the Atlantic to America. One of these technical break through was the ability to store audio information on magnetic tape. Magnetic tape was a process where Iron Oxide embedded on plastic tape could be magnetized by amplified electrical impulses for the purpose of recording and playing back audio information. It offered editing of performances, portability, and better audio quality and was significally cheaper than the existing technologies. ...read more.

Over at CBS the laboratories invented "High Fidelity", a new method of improving the record. The Long-Playing record was invented that increased the number of grooves for the playing speed was lowered from 78 rpm to 33 rpm. Because the speed was lowered and the grooves now smaller, the smaller diamond stylus replaced the larger sapphire stylus. The new stylus needed to use lesser pressure allowing the LP's to last a lot longer. Over at RCA, engineers were developing similar technology. They invented a smaller sized record that revolved at 45 rpm. The size of the 45 and the fact that they only played one song worked very well for the jukebox owners. The 33-rpm LP worked well for playing records that offered more than one song and could sell for more money. With the new technical advances, records emerged as a relatively inexpensive medium compared to the overall production costs of Radio, film ...read more.

It was later shifted to a bandwidth between 88-108 megacycles (between channels 6 and 7 where in now lives today. This proved to be devastating for FM broadcasters for not too many people were interested in buying an FM radio. In 1946 there were almost 7 million AM radios and less than 75,000 FM radios, and it would be a long time until TV was thoroughly entrenched that FM would start to emerge as a broadcaster for classical radio. With the development of TV came the fatal blow to network radio, for the large advertisers were much more interested in sponsoring TV programming than radio. But radio managed to survive via the Independent broadcasters that could rely on local advertisers for revenues, what we call today "Retail" verses the "Corporate" advertising of the major broadcasters. It is amazing to acknowledge the efforts and the luck of the independents in their pursuit of good music. ...read more.