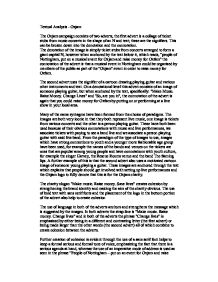 Textual Analysis - Oxjam The Oxjam campaign consists of two adverts, the first advert is a collage of ticket stubs from music concerts in the shape of an N and text; these are the signifiers. This can be broken down into the denotation and the connotation. The denotation of the image is simply ticket stubs from concerts arranged to form a giant capital N, however when anchored by the text below it, which reads, "people of Nottingham, put on a musical event for Oxjam and raise money for Oxfam" the connotation of the advert is that a musical event in Nottingham could be organised by members of the public as part of the "Oxjam" event in order to raise money for Oxfam. The second advert uses the signifier of a cartoon drawing playing guitar and various other instruments and text. On a denotational level this advert consists of an image of someone playing guitar, but when anchored by the text, specifically: "Make Music. Raise Money. Change Lives" and "So, are you in", the connotation of the advert is again that you could raise money for Oxfam by putting on or performing at a live show in your local area. ...read more.

These images are anchored through the text which explains that people should get involved with setting up live performances and the Oxjam logo to fully denote that this is for the Oxjam charity. The charity slogan "Make music. Raise money. Save lives" creates cohesion by strengthening the brand identity and making the aim of the charity obvious. The use of bold text with sans serif fonts and the placement of the logo in the bottom portion of the advert also help to create cohesion The use of language in both of the adverts anchors and strengthens the message which is suggested by the images. In both adverts the strap-line is "Make music. Raise money. Change lives" and in both of the adverts the phrase "Change lives" is emphasised by either being in a different and contrasting letter (the first advert) or being made larger than the other words (the second advert) all of which combine to create cohesion between the adverts. Further creation of cohesion is evident through the use of a sans serif font helps to keep a formal serious and formal tone of voice, emphasizing the fact that there ...read more.

In terms of lifestyle, this advert would most likely be targeting young people of no particular ethnic group and possibly more specifically young people in their late teens and early twenties at university or living in popular cities where there are a large amount of clubs, bars and pubs where Oxjams could be held. To reach this intended age group this advert would probably be put on the back on flyers in clubs and pubs or put on posters in student unions. It is also possible to categorise the target for this campaign through the use of psychographics; if applying the 4c's it can be said that these adverts are targeting reformers. This is because the campaign offers the opportunity to better the lives of others through their own actions; taking part in an Oxjam event. When applying Maslow's hierarchy of needs we could say that the campaign targets and audience who are not only motivated by the need for self actualization but the need for social belonging because they are taking part in a large social event that also benefits the lives of others. ...read more.