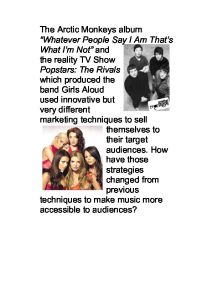 The Arctic Monkeys album Whatever People Say I Am Thats What Im Not and the reality TV Show Popstars: The Rivals which produced the band Girls Aloud used innovative but very different marketing techniques to sell themselves t

The Arctic Monkeys album "Whatever People Say I Am That's What I'm Not" and the reality TV Show Popstars: The Rivals which produced the band Girls Aloud used innovative but very different marketing techniques to sell themselves to their target audiences. How have those strategies changed from previous techniques to make music more accessible to audiences? The music industry is a worldwide business covering many genres and it is hard to define it as one single thing. Within the music industry are a large range of different markets, all targeting their products and musicians to very different audiences. There are many aspects to the music industry that need to be considered in terms of image, audience, audience size and genre. These will all affect the way a band is marketed to its audience. It is well known that "making it" in the music industry as an artist is no easy task. Over the past 40-50 years, many bands have tried and failed spectacularly. However, some have flourished and made their mark in music history, such examples include "The Beatles", "Queen" and "The Rolling Stones". Audiences that need to be considered by music marketers are divided into a wide range of categories such as age, gender, occupation, social grouping, region etc. In order to target specific audiences effectively, bands may need to be branded in a certain way. Branding is usually described in terms of products and is where the product is given a certain image and personality traits in order to appeal to its audience. For example, the brand Levis describes itself as "Sexy, Original and American" therefore personifying its products. In terms of bands, branding should incorporate image and music style, especially when targeting niche groups of people. Over the years, there have been clear differences in audience, shown by their different personal images e.g. Punks, Mods, Grungers, Goths etc. Marketing of bands has to adapt and be completely specific to the typical audience of that music genre and so must be presented in an appropriate style that will sell their music. ...read more.

He was also responsible for the band S Club 7 who were formed to appear in the children's television series LA 7 and Miami 7. The idea for "Pop Idol" proved exceedingly popular in the UK as hopeful singers entertained the nation with notorious displays of "talent" on our television screens. Fuller went on to develop this idea in other countries such as America. The first series of American Idol was highly successful and was responsible for the discovery of Kelly Clarkson, now a hugely popular international pop star. The basic format of the programme has led to various spin offs including more recently X Factor and in September 2002 "Popstars: The Rivals", which resulted in the band Girls Aloud. The show aimed to whittle down the thousands of contenders that auditioned to just two 5 piece groups of boys and girls, One True Voice and Girls Aloud. The current success of Girls Aloud has proved that even manufactured bands can succeed in the record industry if they are promoted and marketed in the right way. A manufactured band is a group of people put together by a record company, or in this case a television show in order to make a profit and give publicity to the medium through which they are published. Manufactured bands are often selected because of looks rather than actual talent in an attempt to appeal to a modern society where beauty and appearance is clearly adamantly important. In relation to Reception Analysis however, not everyone reacts in the same way to the presentation of these manufactured bands, although younger audiences may seem them as figures they can aspire to be, critics often think of manufactured bands as being damaging to the music industry and synthetically artificial. In the 1960's, the first manufactured band "The Monkees" were brought together as the central focus for a television show of the same name in LA, California. ...read more.

These are seen as more covert promotional tactics used by PR not to necessarily directly advertise the band to the audience, but to target those who do not necessarily normally take an interest in celebrities and the music industry and who can be reintroduced into that idea through general television viewing. Some of the less conventional techniques used by bands have succeeded in generating the most publicity. One such example is the well renowned incident of punk rock band The Sex Pistols appearing on the early evening broadcast of the "Today" programme on the 1st of December 1976. Having taken full advantage of facilities backstage and following copious amounts of alcohol, the band caused outrage amongst viewers by openly swearing and being offensive to the equally drunk host Bill Grundy, whose career ended abruptly as a consequence. This "Filth and Fury" prompted increased public interest in the UK punk scene that was developing at the time and although it led to hostile press and local authorities cancelling gigs, it generated much publicity and for the band and reinforced the rebellious punk image. The bands continued antics built them a reputation which increased their popularity amongst teenage audiences, who were eager to rebel against societies codes and conventions of that time. This proves that even risqu� promotional tactics such as that of the Sex Pistols can prove hugely successful and they are still a world renowned band to this day. Music promotional techniques have expanded in recent years with the development of new technology and trends and continue to be highly innovative. The "Digital revolution" has played a major part in this with new areas for advertising such as the Internet and more Television channels aimed at different market segments. The strategies have developed from some earlier successful music promotion tactics to effectively portray musician image and to also target more specific, niche audiences. The internet is likely to remain core to this developing range of promotion and with increasing numbers of people downloading songs online, and it may well dominate all future marketing techniques. ...read more.