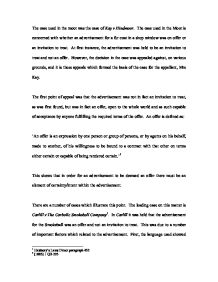 The case used in the moot was the case of Kay v Hindmoor.

The case used in the moot was the case of Kay v Hindmoor. The case used in the Moot is concerned with whether an advertisement for a fur coat in a shop window was on offer or an invitation to treat. At first instance, the advertisement was held to be an invitation to treat and not an offer. However, the decision in the case was appealed against, on various grounds, and it is these appeals which formed the basis of the case for the appellant, Mrs Kay. The first point of appeal was that the advertisement was not in fact an invitation to treat, as was first found, but was in fact an offer, open to the whole world and as such capable of acceptance by anyone fulfilling the required terms of the offer. An offer is defined as: 'An offer is an expression by one person or group of persons, or by agents on his behalf, made to another, of his willingness to be bound to a contract with that other on terms either certain or capable of being rendered certain.'1 This shows that in order for an advertisement to be deemed an offer there must be an element of certainty/intent within the advertisement. There are a number of cases which illustrate this point. The leading case on this matter is Carlill v The Carbolic Smokeball Company2. In Carlill it was held that the advertisement for the Smokeball was an offer and not an invitation to treat. ...read more.

insurance premium. A final case which shows that an advertisement can be an offer is the American case of Lefkowitz v Great Minneapolis Surplus Stores Ltd5. The facts of the case are very similar to the case presented in the moot. However, in this case the claimant appealed on the grounds that, despite having fulfilled the terms of the advertisement, the defendants said the offer was only open to women. In this instance, the claimant was successful and awarded damages of $138.50. The only drawback with using this case is that it is not intended to be an authority on this matter and is merely intended to be persuasive and unlikely to be applied in Britain. On the other hand, though, it is generally accepted that an advertisement is an invitation to treat and not an offer. An invitation to treat is defined as: 'An invitation to treat is a mere declaration of willingness to enter into negotiations; it is not an offer, and cannot be accepted so as to form a binding contract. In practice, the formation of a contract is frequently preceded by preliminary negotiations. Some of the exchanges in these negotiations contain no declaration at all, as where one party simply asks for information. Others may amount to invitations to the recipient to make an offer, these being invitations to treat.'6 Often an advertisement is said to be an invitation to treat to avoid complications in the selling of goods. ...read more.

There was no chemist present near the shelves but there was one present at the cash deck so anyone who was not fit to purchase drugs would not be allow to do so. It was held that the sale of goods took place at the cash desk and not when the customer took the goods off the shelf. The display of goods was merely an invitation to treat and not an offer; therefore there was not breach of the Act. Finally, it is important in cases such as this, to come to a conclusion as to whether the advertisement was an invitation to treat (as was first found) or was an offer/unilateral promise capable of acceptance by performance of the required terms of the agreement. When the advertisement is more carefully examined it amounts to an offer, and as such, establishes a contractual obligation on Hindmoor Superstores to supply the coat to Mrs Kay. This is due to a number of things present in the advertisement. First, the wording of the advertisement is very specific - in that it gives a precise price and not an estimated one. Also, it names a particular item which will be sold for that price and so is not vague about what particular item is available for that price. In addition, any 'ordinary' person, with no legal knowledge of what defines an offer and what defines an invitation to treat who read the advert in the window would be under the impression that if they were the first customer through the doors, as Agnes Kay was, then the coat was (rightfully) theirs. ...read more.