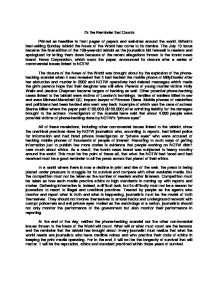 It’s the Reminder that Counts

Printed as headline in front pages of papers and websites around the world, Britain’s best-selling Sunday tabloid the News of the World has come to its demise. The July 10 issue became the final edition of the 168-year-old tabloid as the journalists bid farewell to readers and apologized for letting them down because of the recent allegations thrown to the iconic news brand. News Corporation, which owns the paper, announced its closure after a series of controversial issues linked to NOTW.

The closure of the News of the World was brought about by the explosion of the phone-hacking scandal when it was revealed that it had hacked the mobile phone of MillyDowler after her abduction and murder in 2002 and NOTW operatives had deleted messages which made the girl’s parents hope that their daughter was still alive. Parents of young murder victims Holly Wells and Jessica Chapman became targets of hacking as well. Other potential phone-hacking cases linked to the tabloid were victims of London’s bombings, families of soldiers killed in war and even Michael Mansfield QC, inquest lawyer of Princess Diana. Mobile phones of celebrities and politicians had been hacked also went way back. Example of which was the case of actress Sienna Miller where the paper paid £100,000 ($160,000) after admitting liability for the damages brought to the actress. Investigators of the scandal have said that about 4,000 people were potential victims of phone-hacking done by NOTW’s “private eyes”.

All of these revelations, including other controversial issues linked to the tabloid, show the unethical practices done by NOTW journalists who, according to reports, had bribed police for information and had hired private investigators or “private eyes” who were accused of hacking mobile phones of thousands of people of interest. Resorting to such ways of getting information just to publish few more stories is evidence that people working on NOTW didn’t care much about ethics. As a result, the iconic news brand was subjected to heavy scrutiny around the world. This must be the point of these all, that what the NOTW had faced and had received must be a good reminder to all the press across that planet of their ethics.

In a world where there is now a decline in print and rise of the web, the press is being placed under pressure to struggle for its survival and compete with other available media. But the competition must not be taken as the number of readers and/or listeners. Competition must be taken as how each media practice ethics or high standards in coming up with reports and stories. Gathering information is, indeed, a difficult task, but its difficulty must not be a reason for journalists to resort to illegal and unethical practices. Treated by people as the agents who monitor and report what is truth and what is happening, journalists must be the model of truth themselves. They should not involve themselves to amoral hacks and underground network with corrupt policemen and evil private eyes. Hailed as the watchdogs of a nation, journalists should not only monitor the performance of the government but also monitor their performance in reporting.

At the end of the day, neither the phone-hacking scandal nor the other controversial issues thrown to the News of the World will count. What will or what must count are the lessons and the reminder that the tabloid has brought about. Every journalist must realize that what the world needs are journalists who have credible voices and who practice their code of ethics in keeping the print media operating. For in the end, it will not be the longevity of survival that will matter. It will be the reputation, ethics and standard practiced within those years of survival.