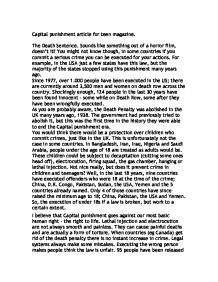 The Death Sentence. Sounds like something out of a horror film, doesn’t it? You might not know though, in some countries if you commit a serious crime you can be executed for your actions. For example, in the USA just a few states have this law, but the majority of the states stopped using this punishment many years ago.
Since 1977, over 1.000 people have been executed in the US; there are currently around 3,500 men and women on death row across the country. Shockingly enough, 124 people in the last 30 years have been found innocent - some while on Death Row, some after they have been wrongfully executed.
As you are probably aware, the Death Penalty was abolished in the UK many years ago, 1938. The government had previously tried to abolish it, but this was the first time in the history they were able to end the Capital punishment era.
You would think there would be a protection over children who commit crimes, just like in the UK. This is unfortunately not the case in some countries. In Bangladesh, Iran, Iraq, Nigeria and Saudi Arabia, people under the age of 18 are treated as adults would be. These children could be subject to decapitation (cutting some ones head off), electrocution, firing squad, the gas chamber, hanging or lethal injection. Not nice really, but does it prevent crime in children and teenagers? Well, in the last 18 years, nine countries have executed offenders who were 18 at the time of the crime; China, D.R. Congo, Pakistan, Sudan, the USA, Yemen and the 5 countries already named. Only 4 of those countries have since raised the minimum age to 18; China, Pakistan, the USA and Yemen. So, the execution of under 18s if a law is broken, but work to a certain extent.

I believe that Capital punishment goes against our most basic human right - the right to life. Lethal injection and electrocution are not always smooth and painless. They can cause painful deaths and are actually a form of torture. When countries (eg Canada) get rid of the death penalty there is no instant increase in crime. Legal systems always make some mistakes. Executing the wrong person makes people think the law is unfair. 95 people have been released from death row in the USA since 1973. They were found to have been wrongly convicted. But on the other hand, Murderers forfeit their human rights when they take other peoples lives. The punishment should fit the crime. If the punishment is too light it cheapens our rights to life. It is common sense to say that killing murderers will deter others. It is hard to prove the effect because you are measuring something not happening. A killer who has been executed can never do it again.

In total, 109 countries have abolished the death penalty in law or practice.