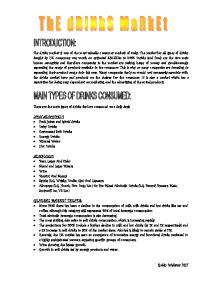 The drinks market is one of the most valuable consumer markets of today. The market for all types of drinks bought by UK consumers was worth an estimated �46.55bn in 2002. Drinks (and food) are the two main human necessities and therefore companies in the market are making heaps of money and simultaneously expanding the range of products available to the consumer. This is why so many companies are investing in expanding their product range into this area. Many companies that you would not necessarily associate with the drinks market have put products on the shelves for the consumer. It is also a market which has a reputation for being very dependent on marketing and the advertising of the actual products. These are the main types of drinks that are consumed on a daily basis: NON-ALCOHOLIC: * Fruit juices and hybrid drinks * Dairy Drinks * Carbonated Soft Drinks * Energy Drinks * Mineral Water * Hot Drinks ALCOHOLIC: * Beer, Lager And Cider * Shand and Lager Mixers * Wine * Martini And Sherry * Spirits (E.G. Whisky, Vodka, Gin) And Liqueurs * Alcopops (E.G. Hooch, Two Dogs Etc.) Or Pre-Mixed Alcoholic Drinks (E.G. Bacardi Breezer, Metz, Smirnoff Ice, V2 Etc.) GENERAL MARKET TRENDS: * Since 1995 there has been a decline in the consumption of milk, milk drinks and hot drinks like tea and coffee, although this category still represents 40% of total beverage consumption. ...read more.

There are only a few national multiples of significance, including First Quench, Oddbins and Majestic Wine Warehouses. This diverse range of drinks outlets is supported by the numerous occasions on which it is seen by consumers to be appropriate to enjoy an alcoholic drink. Key Note's consumer usage opinion survey in 2002 found that the overall leading occasion was Christmas and New Year, but there are many other times when consumers enjoy a drink. Here is a list of the major drinks manufacturers of drinks from the year 2002. They were selected on the basis of over �500,000 profit from sales in 2002: According to a recent survey conducted by Mintel.com, these thirty drinks manufacturers are the market leaders in producing and selling soft Drinks. * Belvoir Fruit Farms * Beverage Brands * Bottle Green Drinks Company * Britvic Soft Drinks * Cadbury Schweppes * Coca Cola Enterprises * Cott Beverages * Danone * WatersElla Drinks * G Costa * Glaxo Smith-Kline * Hall & Woodhouse * Matthew Clark * BrandMerrydown plc * Nestl� * Novartis * Consumer Health * Pago Fruit Juices * Pernod Brands * Perrier * Vittel * UKPrince's Soft Drinks * The Silverspring Mineral Water Co. * South African Breweries * T&T Beverages * Thorncroft * Tropicana * Twinings * Van den Bergh Foods * Villa Soft Drinks * Well Well Well Although most normal people may have only heard of a few of the names above, these companies are supplying all the supermarkets and other brands with their products, even if they are not as recognised, perhaps, as the brands that they sell to. ...read more.

I will now choose a few well known drinks brands and analyse their advertising campaigns, corporate identity and target markets: BUDWEISER: SLOGAN: "KING OF BEERS" CURRENT ADVERTISING SLOGAN: "THINK FRESH, DRINK FRESH" I think that by using these two slogans as the front of the Budweiser advertising campaign, the company is portraying the image of Budweiser being a high- quality beer, but is available to everyone. This is a very clever media cover, as it appeals to all classes of people and fools them into believing that they are of a higher class than they may actually be, and presenting the product as fresh and the best of the best. Budweiser have also moved their recent campaigns in the direction of becoming an all-round corporation, rather than just a beer company. This adds to the appeal of the product. Here is what us beer- boffins, like to call: the Budweiser tasteometer: And there you have it. Straight from the people at Budweiser, and not by me that's for sure. Anywho, Budweiser has become one of the biggest corporations in the world and not just because of its product, but also because of the hugely valuable corporate image it has carved for itself. Furthermore, they make some damn-fine beer. All drinks have some of marketing program behind them. It is possible to work out which of these has been the most successful, by studying the sales of various brands. I hope that in this project I have outlined the main competitors in the market and given some information about how each product is promoted, sold and received by the public. Robin Webster 10H ...read more.