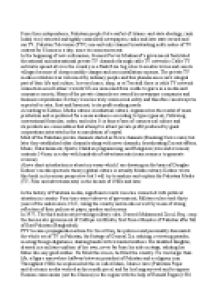 The Effect of Censorship on the Media in Pakistan.

﻿From their independence, Pakistani people fed a surfeit of Islamic and state ideology, (anti India) via (restricted and tightly controlled) newspapers, radio and later state owned and ran TV, Pakistan Television (PTV) one and only channel broadcasting multi nature of TV content for 8 hours in a day, since its commencement. In the beginning of new millennium, General Pervez Musharraf?s government facilitated the national and international private TV channels through cable TV networks. Cable TV networks spread all over the country in a flash from big cities to smaller towns and remote villages because of cheap monthly charges and zero installation expense, The private TV media revolution was welcomed by ordinary people and this phenomena is now integral part of their life and culture, In every home, shop, or at Tea stall there is cable TV network connection as in Kellner?s words We are immersed from cradle to grave in a media and consumer society, Many of the private channels are owned by newspaper companies and business corporations. So they were/are truly commercial entity and therefore can always be expected to cater, first and foremost, to its profit-making needs. ...read more.

He filled the screen, he filled the country. He was larger than life, a figure somewhere halfway between president of Pakistan and a religious icon. Throughout 1980s he implemented the so called Islam, Islamic laws (Pakistani Paper and electronic media worked as his mouth piece) and for his long survival and to oppose Russian communism (not the Chinese) in the region with the help of Ronald Regan (1981 ? 1989) as this decade was the end of cold war and beginning of the proxy war between US and formerly Russian federation in Afghanistan fought by (Mujahidin) Soldiers of God (stated by former US deputy defense chief Zbigniew Brzezinski ), the supportive role Zia played for the anti-Soviet mujahidin in Afghanistan continuous and free supply of Arms and ammunition to Mujahidin and to war lords, lose control over north-western boarders had been rewarded as free availability of Narcotics and weapons in Pakistani society. The martial law of Zia-ul-Haq and the culture of Kalashnikov, heroin and violent religiosity struck a crushing blow to the film industry and then films multiplied this phenomena?s and gradually the culture changed completely and a new genre of cinema grew where glamorization of violence and brutality in extracting vengeance were common subjects of film making. ...read more.

Zia ul Haq?s name and his policies will be remember by succeeding generations, he completely changed the Pakistan, Muslim culture in sub-continent and its social fabric, stated by famous TV actress of that time Mehtaab Akbar Rashidi, she shared her experiences during Zia?s era and how she was barred from hosting two shows ?Farozan? and ?Apni Baat? (talk shows on social issues) just because she refused to cover her head. ?Through the media, Zia wanted to portray his personally idealized image of Pakistani women and how they should look,? she said. She did not appear on TV for the next eight years of Zia?s rule. Male artists were newer allowed to touch female actresses, dialogues, and impressions were be in kind of limits which approved by the censor board or committees, almost all leading Pakistani TV actors had ?beards: ?Talat Hussain, Rahat Kazmi, Shafi Muhammad, all had beards. ?It was a fashion of that time expressing creativity and manhood? First time in the history of Pakistani TV, images and videos ofwomen and men punished durray or korray for breaking of hudod the people broadcasted nation wide in news Islamic religious scholars were often seen in TV talk shows and in solo shows describing religion, religious issues discussing moral values of Muslims. Islamic scholars like Moulana Asrar ahmed, Tahir ul Qadri, kausar Niazi ...read more.