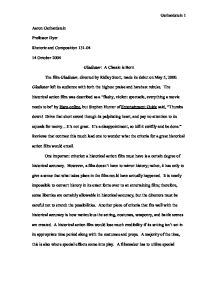 The film Gladiator, directed by Ridley Scott, made its debut on May 5, 2000. Gladiator left its audience with both the highest praise and harshest rebuke. The historical action film was described as a &quot;flashy, violent spectacle

Aaron Gerhardstein Professor Dyer Rhetoric and Composition 131-04 14 October 2004 Gladiator: A Classic is Born The film Gladiator, directed by Ridley Scott, made its debut on May 5, 2000. Gladiator left its audience with both the highest praise and harshest rebuke. The historical action film was described as a "flashy, violent spectacle, everything a movie needs to be" by Haro-online, but Stephen Hunter of Entertainment Guide said, "Thumbs down! Drive that short sword though its palpitating heart, and pay no attention to its squeals for mercy...It's not great. It's a disappointment, so kill it swiftly and be done." Reviews that contrast this much lead one to wonder what the criteria for a great historical action film would entail. One important criterion a historical action film must have is a certain degree of historical accuracy. However, a film doesn't have to mirror history; rather, it has only to give a sense that what takes place in the film could have actually happened. It is nearly impossible to convert history in its exact form over to an entertaining film; therefore, some liberties are certainly allowable in historical accuracy, but the directors must be careful not to stretch the possibilities. Another piece of criteria that fits well with the historical accuracy is how meticulous the setting, costumes, weaponry, and battle scenes are created. ...read more.

One of Gladiator's most spectacular achievements is its recreation of second-century Rome. It is astonishingly credible and stunning in its detail. Gladiator brings back to life in all its grandeur one of the greatest periods in history. The most amazing recreation is the Coliseum. The amount of detail and accuracy can't be over-emphasized. Flipside Movies says, "From the gothic forests of Germania to the center of the Coliseum, Scott delivers a fully realized vision of Rome at its height. We can feel the rose petals falling on the parades, and hear gladiators clash with jaw-rattling intensity." Even Gladiator's costume and weaponry are accurate down to the last detail, thanks to costume designer Janty Yates and supervising armorer Simon Atherton. Haro-online points out the, "Costumes and sets are beautifully detailed, from Maximus' tents and Commodus' opulent living quarters to the dusty slave pens of Proximo." Gladiator's battle scenes and sword fights were also very carefully choreographed and very realistic. They were electrifying and elating, but at the same time not overdone or overwhelmingly unbelievable. The impressive settings and scenes in Gladiator are a direct result of its special effects. The digital technology used to create the Coliseum and the battle scenes is staggering in its scope. The special effects make the movie seem like the viewer is there, in the Coliseum, watching one of its games. ...read more.

The combination of tear-evoking and adrenaline-pumping music adds to all the sensations that Gladiator brings forth. Haro-online adds, "Hans Zimmer teams up with Lisa Gerrard to create a loud score that easily complements the tone of the film." Academy voters agreed, awarding Gladiator a nomination for Best Original Score and voting it a winner for Best Sound. Yet another factor that can't be overlooked is the quality of Gladiator's actors. Its Academy Award for Best Actor and Academy Nomination for Best Supporting Actor speak for themselves. Russell Crowe's lead performance is marvelous. "He moves through this film like a caged panther, dripping fierce masculinity and infecting every scene with relentless power," declares Flipside Movies. So what constitutes a successful historical action movie? Realistic historical accuracy. Amazing attention to detail. Intriguing plot. High emotions. Superb special effects. Outstanding score. Great casting and acting. Rave reviews. Gladiator possesses all these and is the epitome of a great historical action film. Yet accolades alone did not make it a box-office success. Many films garner pre-release raves, yet disappoint in front of an actual audience. Gladiator delivered on all counts, from its early praise to its amazing box-office success, setting records in theatres coast-to-coast. The perfect combination of all these melded with its attention to historical detail make Gladiator worthy of its Best Picture award and a true classic for the ages, much like its classic cousin Ben-Hur. ?? ?? ?? ?? Gerhardstein 1 ...read more.