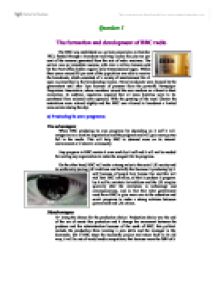 The formation and development of BBC radio

Question 1 The formation and development of BBC radio Text Box: The BBC was established as a private corporation in October 1922, funded through a broadcast receiving licence fee plus ten per cent of the revenue generated from the sale of radio receivers. The service was an immediate success, with over a million licences sold by the Post Office before regular daily transmissions began. Within three years around 85 per cent of the population was able to receive the broadcasts, which consisted of a variety of entertainment for all ages as prescribed in the broadcasting licence. News broadcasts were banned by the government until after 7pm because of pressure from the powerful Newspaper Proprietors Association, whose members viewed the new medium as a threat to their circulation. In addition, regulation required that all news bulletins were to be purchased from selected news agencies. With the granting of the royal Charter the restrictions were relaxed slightly and the BBC was allowed to broadcast a limited news service during the day. a) Producing its own programs: The advantages: When BBC producing its own programs by depending on it self it will categorize as a creative organization and the programs and will gain more power full in the media. This will help BBC to demand more on its internal environment or it interval community. Any program in BBC creates it own work by it self and it will not be needed for waiting any organization to make the scaguall for its programs. Text Box: On the other hand, BBC will make a strong value to the social UK society and its uniformity (saving UK traditions and beliefs) that because it producing by it self, because of people boy license Fee and this will sub Burt BBC activities, so that it produce it program by it self to maintain its traditions and the UK simples specially after the revolution in technology and communications, and in fact that what government need from BBC to give more care to the education and social programs to make a strong relations between government and UK citizen . ...read more.

Within this set of variables, we can cite the composition of the organizational coalition, the organizational division of labor in decision-making, and the definition of problems facing the organization. Thus, I have argued that organizational goals change as new participants enter or old participants leave the coalition. I have that the operative goals for a particular decision are the goals of the sub-unit making that decision. Finally, I have argued that goals are evoked by problems. The second set of variables influences the aspiration level on any particular goal dimension. Here I have identified essentially three variables: the organizations past goal, the organizations past performance, and the past performance of other (comparable) organizations. The aspiration level is viewed as some weighted function of these three variables. ORGANIZATIONAL EXPECTATIONS Expectations are seen as the result of drawing inferences from available information. Thus, we consider variables that affect either the process of drawing inferences or the process by which information is made available to the organization. With respect to inference drawing, we have not attempted to reflect all of the recent efforts in the psychology of individual choice. With respect to the process by which information is made available, we have cited particularly variables affecting search activity within the firm. Affecting the intensity and success of search are the extent to which goals are achieved and the amount of organizational slack in the firm. Affecting the direction of search are the nature of the problem stimulating search and the location in the organization at which search is focused. ORGANIZATIONAL CHOICE Choice takes place in response to a problem, uses standard operating rules, and involves identifying an alternative that is acceptable from the point of view of evoked goals. Thus, the variables that affect choice are those that influence the definition of a problem within the organization, those that influence the standard decision rules, and those that affect the order of consideration of alternatives. ...read more.

(Mosey quoted in Wills, 2000b). ITV won the premiership highlights for $61M, a move that cost the BBC its Match of the Day programe and, according to Dyke, made no economic sense. However the BBC had bid more than that amount - an estimated $70m- for the FA cup, plus some England matches, a package generally thought of as less important than the premiership. The culture secretary Charis Smith was unperturbed by the loss of the BBC's premiership right to ITV. Although lost to the BBC, they are still available on a free-to-air terrestrial channel accessible to all. Indeed, Mr. Smith applauded the boost that the inflated price will give to the Premier League clubs. Because of the industry-wide obligation to contract a minimum of 25 per cent of programming through independent companies, it has become commonplace over the past decade for some actors and presenters to own production companies and to insist on working thought them. Third dilemma: global organization V. UK provider Text Box: The third dilemma concerns the growth of new channels and alliances covering international audiences. What factors are influencing the move towards the globalization of the BBC, and should the corporation focus on the national audience who pays for its services? It can be argued that the BBCs success as a national broadcaster along with the other main UK broadcasters- is hampering its efforts to exploit its programmes on the world market. The British tradition for commissioning in series of six to ten programmes is against the majority of potential foreign buyers needs of 26, making British series difficult to sell over seas. While this is beginning to change, government regulations requiring a proportion of programmes to be made in the region also holds back exports, as international viewers find them difficult to understand. The British media industry as a whole has failed to exploit new markets, allowing others to gain access. The arrival of satellite and cable channels in the UK created a great hunger for content that was eventually filled by US broadcasters on account of the failure of UK broadcasters to supply. ...read more.