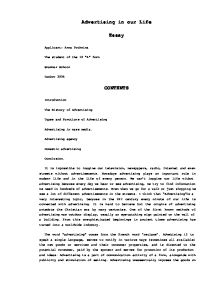 Advertising in our Life Essay Applicant: Anna Puchnina The student of the 10 "A" form Grammar School Tambov 2004 CONTENTS Introduction The History of Advertising Types and Functions of Advertising Advertising in mass media. Advertising agency Domestic advertising Conclusion. It is impossible to imagine our television, newspapers, radio, Internet and even streets without advertisements. Nowadays advertising plays an important role in modern life and in the life of every person. We can't imagine our life without advertising because every day we hear or see advertising, we try to find information we need in hundreds of advertisements. Even when we go for a walk or just shopping we see a lot of different advertisements in the streets. I think that "Advertising" is a very interesting topic, because in the XXI century every minute of our life is connected with advertising. It is hard to believe but the origins of advertising antedate the Christian era by many centuries. One of the first known methods of advertising was outdoor display, usually an eye-catching sign painted on the wall of a building. From this unsophisticated beginnings in ancient times advertising has turned into a worldwide industry. The word "advertising" comes from the French word "reclame". Advertising if to speak a simple language, serves to notify in various ways (sometimes all available) the new goods or services and their consumer properties, and is directed to the potential consumer, paid by the sponsor and serves for promotion of its production and ideas. Advertising is a part of communication activity of a firm, alongside with publicity and stimulation of selling. Advertising unessentially imposes the goods on the buyer. Sometimes it simply forces to recollect the last concrete mark or the name of the goods or service when the customer makes the choice. At the beginning the consumer decides to choose from what, and already then what mark to prefer, on the basis of the representation about it, a stereotype or a developed image of concrete mark of the goods or service. ...read more.

That's why I've chosen a very actual problem to investigate nowadays, the problem which worries and interests a lot of people and many people are involved in the process of advertising. Abroad advertisements are usually carried by mass media - newspapers, magazines, radio, TV and by outdoor advertising - signboards, standard boards, hoardings. Advertising in popular editions is very expensive. Therefore, saving on them, the advertiser risks to lose broad audience of consumers. The advertising is usually bright and eye-catching. At the same time it should be understandable to the reader, the spectator, the student, where advertising and where an editorial material. The form of the advertising reference should correspond to culture and outlook of an advertising audience on which it is directed. Creative approaches can be different. For example, while advertising the goods of mass demand, as a rule, we must use emotional motives, for products of industrial purpose - rational. But in any case advertising is effective only when meets the following requirements: 1. Market characteristics of the goods are precisely formulated - advertising contains specific information of its use, differences from the goods of competitors; 2. Advertisement promises the consumer essential benefits at purchasing the goods, the advantages of which are given, positive features are singled out in headings of advertising, in illustrations and even in the stylistics of the text and graphic materials; 3. Advertisement contains successful advertising idea - original, attractive, and at the same time easy for understanding and recognition; 4. Advertising creates and introduces in consciousness the clear image of the goods which is thought over in details - a stereotype increasing its value in opinion of consumers; 5. Advertising emphasizes high quality of the offered goods and at the same time itself associates with this high quality; 6. It is original and consequently it is not boring, does not repeat the known, bothered decisions; 7. Advertising has an exact target orientation, reflecting different searches, desires, interests of concrete consumers and informing them so that taking into account distinctions of a consumer, it demands certain advertising audience; 8. ...read more.

That's why advertising in Tambov is the sphere which greatly needs to be changed and to be mastered. I think it is not occasionally that the department of design and advertising has been set up in Tambov State University named after G.R. Derzhavin. I would like to finish my essay speaking about new advertising techniques: endorsement and product placement. When you watch a TV programme or a movie, you expect to see advertisements in the commercial breaks, but you are also probably receiving a large number of commercial messages during the film or progremme as well, thanks to a marketing technique called "product placement". For example, why do the "men in black" wear Ray-Ban sunglasses? The answer is that Ray-Ban did a deal with the film's producers and followed it with a $ 10 million advertising campaign. Also many advertisers ask famous, glamorous or successful people to give their approval to a particular brands or products - a technique known as endorsement. After the end of her marriage to the UK's Duke of York, Sarah "Fergie" Ferguson was asked by the American company WeightWatchers to appear in an advertising campaign for their range of slimming methods and products. There is another example of endorsement. Sun Advertising, the Japanese advertising agency, has beaten its main competitor Top Ad, to win a contract to promote Tora's new soft drinks range. They are going to launch a 10 billion yen TV advertising campaign - one of the biggest ever seen in Japan. The campaign includes an ad with the best baseball player from every major baseball team in Japan. Tatsuo Tokunaga, the director who dreams up Sun Advertising's campaigns, says that the firm tries to capture people's attention. To my mind, they are more expensive than simple advertisements but more powerful. I think so because we usually trust outstanding persons, we want to look like them, we even copy them to some extent. Advertising is an essential part of business. Ads are necessary either for the manufacturer or for the buyer. ...read more.