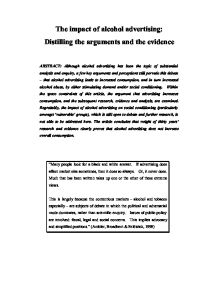 The impact of alcohol advertising: Distilling the arguments and the evidence.

The impact of alcohol advertising: Distilling the arguments and the evidence ABSTRACT: Although alcohol advertising has been the topic of substantial analysis and enquiry, a few key arguments and perceptions still pervade this debate - that alcohol advertising leads to increased consumption, and in turn increased alcohol abuse, by either stimulating demand and/or social conditioning. Within the space constraints of this article, the argument that advertising increases consumption, and the subsequent research, evidence and analysis, are examined. Regrettably, the impact of alcohol advertising on social conditioning (particularly amongst 'vulnerable' groups), which is still open to debate and further research, is not able to be addressed here. The article concludes that weight of thirty years' research and evidence clearly proves that alcohol advertising does not increase overall consumption. "Many people look for a black and white answer. If advertising does affect market size sometimes, then it does so always. Or, it never does. Much that has been written takes up one or the other of these extreme views. This is largely because the contentious markets - alcohol and tobacco especially - are subjects of debate in which the political and adversarial mode dominates, rather than scientific enquiry. Issues of public policy are involved: fiscal, legal and social concerns. This implies advocacy and simplified positions." (Ambler, Broadbent & Feldwick, 1998) Introduction The pros and cons of alcohol in society have long been the subject of contentious debate amongst many sectors of the community - particularly those concerned with health, welfare, religion, law enforcement and public policy, and those from the direct and indirect alcohol industry. ...read more.