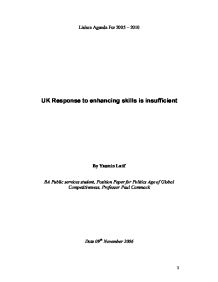 the lisbon agenda UK Response to enhancing skills is insufficient

Lisbon Agenda For 2005 - 2010 UK Response to enhancing skills is insufficient By Yasmin Latif BA Public services student, Position Paper for Politics Age of Global Competitiveness, Professor Paul Cammack Date 09th November 2006 Contents 1. Introduction pg.3 2. UK Position pg.4 3. Comparison pg.8 4. Conclusion pg.10 5. Bibliography pg.11 Introduction The Lisbon Agenda is a programme brought by the EU (A8, Czech Republic, Estonia, Hungary, Latvia, Lithuania, Poland, Slovenia, Slovakia) to make Europe competitive in the economic and knowledge- driven world today by 2010. It was initiated in 2000 but due to failure of several related procedures was delayed and relaunched in 2005. Specifically UK's target set is for it to become competitive in the global economy, looking at where it'll be in the investment in skills and strategies for employment. UK aims to create a balance of fiscal sustainability and funds for welfare allowing ageing population to be a part of this equation and making Britain a knowledge-driven society by giving more young people necessary education, training (skills) where the 25plus and 50 plus making either education or employment a realistic opportunity channelled through the emergence of innovation, technology, speed of learning, getting people off benefits. I will be looking at what measures should be taken to tackle why UK isn't meeting its own target already set of 80% of population being in employment, looking at New Deal as the main force in getting people equipped with skills, training or education needed for employment ...read more.

UK realises there is a link between inefficiency of the labour market and ethnic minority being unemployed however 89% of the white population are joining New Deal only 11% are from ethnic minority background (Source 'Evaluation of Targeted Initiatives, published 03Nov06)(2). According to figures from Department for Employment and Learning provided by Targeted Initiatives teams in July 2006 outcomes of New Deal in Northern Ireland are that out of 657 only 219 participants of New Deal entered employment that's significantly less than half(3). The figures don't show how many entered employment as a result of completing the 50 weeks on New Deal, as an estimate from the attached figures only 159 out of 657 entered employment as a result of completing course with New Deal. How then is my question to New Deal, have the reforms been effective? UK's main targets are to increase number of people in higher education by 50% for 18-30 alongside to cut down on the number of people who don't complete their education. To increase number of adults with skills required for employment to progress to higher levels of training this is to be done by improving basic skill levels in Literacy and numeracy of 2.25 million adults between 2001-2010. For there to be 1 million adults in the workforce with level 2 qualification between 2003-2006. EU assessment commissioner for UK national reform programme stresses that UK isn't doing enough to address skills challenges. ...read more.

repairing so much but reforming or forming new initiatives which don't really provide what's required to achieve a competitive labour force though its exceeded the Lisbon targets 3 times in a row. Conclusion UK reform programme isn't tackling the demographic challenges nor the long term unemployment alongside this it isn't dealing with the number of adults with intermediate to low skills. It doesn't at all focus on what's key here, the time in which an individual becomes equipped with the necessary skills and capability of being adaptable in the labour force to become employable. The New Deal is lacking thorough integration and full implementation to what it sets out to do in all areas of the UK in the Lisbon agenda. UK's target of achieving 80% employment rate isn't possible with the current level of productivity in the New Deal programme. Britain is lacking in the quality of training and skills programme to get people into the labour force. New Deal needs to be transparent in its findings and with budget (quantity) there needs to be a reflection to a standard of quality compromising the �3.6 billion spent on New Deal. Denmark are organised and approaching their main challenges which is what UK needs to do to be organised in what it aims to achieve. There needs to be more concentration on training for the relevant skills for relevant sectors of employment according to Eurostat in 2003, they found 'work-based training other than apprenticeships is relatively little used' (5). ...read more.