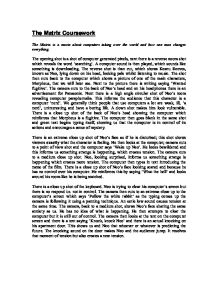 The Matrix Coursework The Matrix is a movie about computers taking over the world and how one man changes everything. The opening shot is a shot of computer generated pixels, next there is a reverse zoom shot which reveals the word 'searching'. A computer sound is then played, which sounds like something is downloading. The reverse shot is than cut, which shows Keanu Reeves, known as Neo, lying down on his head, looking pale whilst listening to music. The shot then cuts back to the computer which shows a picture of one of the main characters, Morpheus, that we will later see. Next to the picture there is writing saying 'Wanted fugitive'. The camera cuts to the back of Neo's head and on his headphones there is an advertisement for Panasonic. Next there is a high angle circular shot of Neo's room revealing computer paraphernalia. This informs the audience that this character is a computer 'nerd'. ...read more.

An eerie low sound causes tension at the same time. The camera, back to a medium shot, shows Neo's face sharing the same anxiety as us. He has no idea of what is happening. He then attempts to clear the computer but it is still out of control. The camera then looks at the text on the computer screen and there is a text saying 'Knock, knock Neo' and there is an actual knocking on his apartment door. This shows us and Neo that whoever or whatever is predicting the future. The knocking sound on the door makes Neo and the audience jump. It resolves that moment of tension but also creates a new tension. There is a medium close up shot of Neo's face and shows us that he thinks it's all a dream. The camera cuts to the door from the outside and reveals the room number '101'. This is an example of intertextuality. ...read more.

The books' chapter is called 'Nihilism' which means 'nothing is real'; this relates to 'The matrix' as in the matrix nothing is real. The second time the door is open he is more confident opening it fully. Allowing an angle shot showing us five weirdly dressed people. The person Neo speaks to says 'you don't exist' which is a key feature in the movie, Neo also believes he doesn't exist, this is what 'The Matrix' is all about. The man then says 'You look white' which is pointing out he has a boring life and is in his room all the time and gets no daylight. A camera shot over Neo's head, pointing down enforces he is weaker then the five people. The camera then cuts to a point of view shot which shows Neo seeing the white rabbit on the girl's back. The camera then zooms into Neo's face because the computer had already said to him 'follow the white rabbit'. To end the scene there is 'tinkling' music which is high pitched signifying realisation. By Kasim Kashmiri 10a ...read more.