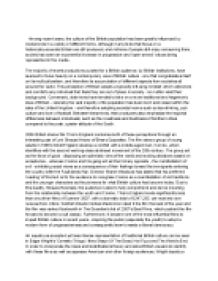 The Media's Influence on British Culture

Transfer-Encoding: chunked ﻿Among recent years, the culture of the British population has been greatly influenced by media texts in a variety of different forms. Although many texts that focus on a historically-accurate Britain are still produced, and millions of people still enjoy consuming them, society has seen an exponential increase in progressive and 'open-armed' values being represented in the media. The majority of recent productions curated for a British audience, by British institutions, have seemed to focus heavily on a contemporary view of British culture - one that congratulates itself on its multiculturalism, and therefore its accumulation of different aspects from societies all around the world. This perception of Britain adopts a typically left-wing mindset which welcomes and comforts any individual that feels they are out of place in society - no matter what their background. Conversely, older texts have tended to take on a more traditional and hegemonic idea of Britain - whereby the vast majority of its population has been born and raised within the isles of the United Kingdom - and therefore adopting societal norms such as tea-drinking, pub culture and love of football. Between these texts, their producers also emphasise the regional differences between individuals; such as the rowdiness and bluntness of Northern cities compared to the posh, quieter attitude of the South. ...read more.

Aspects such as pub culture, regional British demeanor (loud and blunt in the North, posh and stuck-up in the South) and individualism make frequent appearances. BBC One's Sherlock also follows this template. Due the high domestic popularity of Season 1, the property was quickly invested in by roughly 180 territories, primarily the US, whom began to air the season on PBS a mere three months after its British premiere. Unfortunately Stuart Hall's Audience Reception theory affected the outsiders' perception of Britain, as they took it for face value; without consuming texts from other regions of England to compare. The majority of the American and foreign audiences that would not have been well-versed in British culture - and therefore acted as a more active audience as the Brits did and seemed to utilise the show not only for entertainment and escapism, but social integration also (Uses & Gratifications theory). With regular appearance of quintessentially British tropes, such as Big Ben and black taxi cabs, Sherlock created a stereotypical facade of what England was for these unfamiliar viewers. Although being educated in London geography and English slang, the show - by no fault of its own - encouraged foreign viewers to think in very general terms regarding British culture; that this show encompassed all that the UK was about. ...read more.

due to its 'blind adherence to a political agenda' - as one individual stated it in the comments. Debenhams followed the same theme; presenting a 'Cinderella-esque' story between a black man and a white woman finding love at Christmas time. Regardless of the positive message, this video received even more criticism. Only 7,000 of the 13,000 total ratings of the video were positive. Many commenters felt the presentation of the advert was 'harmless' and even 'heart-warming', yet, upon further inspection, the Hypodermic Needle theory can be applied. The Debenhams social media team began deleting negative - or even any critical comments in general from the page - which only reinforced what the outraged individuals were explaining. It seemed that Debenhams really were pushing for a particular agenda by attempting to 'inject' it into a passive audience under a well-meaning disguise. All of these examples, when considered holistically, reveal the social split between mindsets. Where other texts, such as My Street, raise the progressivist point-of-view in an analytical and non-biased way, others - such as the Christmas adverts - seem to force the issue onto the public; attempting to directly influence the viewpoints of traditional Brits on multiculturalism. It is both true to say the media has influenced a great number of the population of the UK, yet not necessarily the culture itself. ...read more.