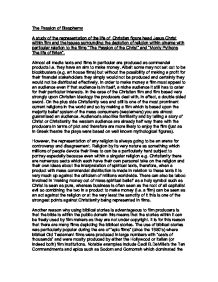 The Passion of Blasphemy: A study of the representation of Christian figure head Jesus Christ within Cinematic Texts

The Passion of Blasphemy A study of the representation of the life of Christian figure head Jesus Christ within film and the issues surrounding the depiction of religion within cinema with particular relation to the films "The Passion of the Christ" and "Monty Pythons The life of Brian". Almost all media texts and films in particular are produced as commercial products i.e. they have an aim to make money. Albeit some may not set out to be blockbusters (e.g. art house films) but without the possibility of making a profit for their financial stakeholders they simply would not be produced and certainly they would not be distributed effectively. In order to make money a film must appeal to an audience even if that audience is in itself, a niche audience it still has to cater for their particular interests. In the case of the Christian film and film based very strongly upon Christian ideology the producers deal with, in effect, a double sided sword. On the plus side Christianity was and still is one of the most prominent current religions in the world and so by making a film which is based upon the majority belief system of the mass consumers (westerners) you are almost guaranteed an audience. Audience's also like familiarity and by telling a story of Christ or Christianity the western audience are already half way there with the producers in terms of plot and therefore are more likely to enjoy the film (just as in Greek theatre the plays were based on well known mythological figures). However, the representation of any religion is always going to be an arena for controversy and disagreement. Religion by its very nature as something which millions of people devote their lives to can be a particularly hard subject to portray especially because even within a singular religion e.g. Christianity there are numerous sects which each have their own personal take on the religion and their own ideas about the interpretation of spiritual texts, therefore, ...read more.

The film ends with people on crucifixes singing the highly ironic song entitled "always look on the bright side of life". The representation of Christ alongside comedy proved to be highly controversial and led to the film being banned in several countries; for eight years in the republic of Ireland; for one year in Norway (a fact which when on release in Sweden marketers used to create the films tagline "The film that is so funny that it was banned in Norway"); The film was not released until 1990 in Italy (eleven years after it was made) and was also not shown until 2001 in Jersey. The films producers maintain however that the film is far more of a political satire than religious attack, for example; in the film there is a joke about the revolutionary groups opposing the Roman rule who are in effect more at odds with one another than the Romans for example "The People's Front of Judea", "The Judean People's Front" and "The Popular Front" (with one member). This is a satire based on the multiplication of ineffectual left wing parties during 1970's Britain. These groups would split every few weeks and end up opposing each other more than the British Government. The life of Brian made no attempt to create an accurate depiction of the life of Jesus Christ therefore the scrutiny it came under was somewhat irrelevant by those claiming it was attempting to show Jesus in a bad light. However there are other films which have come under scrutiny for their attempts to show the "truth" of Jesus' life. One of the most relevant modern examples of this is the "Passion of The Christ" (Director: Mel Gibson). The Passion of The Christ was an attempt by its producers to produce a truthful and historically accurate depiction of the last days of Jesus' life. However, many critics claimed that the films 'truth' was that the producers were obsessed with images of violence and blood and the film had little historical substance. ...read more.

* 1973 - Godspell Directed by David Greene "John the Baptist gathers a diverse band of youthful disciples to follow and learn from the teachings of Jesus. These disciples then proceed to form a roving acting troupe that enacts Jesus's parables through the streets of New York." (taken from wikipedia) The film received generally positive reactions and reviews. * 1973 - Jesus Christ Superstar "Based on a concept album project written by Andrew Lloyd Webber and Tim Rice, and the subsequent long-running Broadway performance, this film tells the story of the final 6 days in the life of Jesus Christ through the troubled eyes of Judas Iscariot. Too often miss-labeled a musical, this film is a "rock opera." There are no spoken lines, everything is sung." Taken from www.imdb.com - directed by Norman Jewison this film was critically acclaimed and nominated for an Oscar (best musical score) * 1979 - Monty Pythons life of Brian Infamously controversial parody of Jesus' life which enraged Christian groups throughout the world. Directed by Terry Jones as part of Monty Pythons Flying Circus (a comedy production company). * 1988 - The last temptation of Christ Directed by Martin Scorseze another controversial film which shows Jesus as a human with human faults, was banned by several Christian groups. The film is based around Jesus' struggle to accept his fate as the son of god. * 1989 - Jesus of Montr�al Directed by Denys Arcand it is based around a group of actors who put on a new style passion play which delights audiences by enrages the church * 1999 - Dogma Director Kevin Smith, the last descendant of Christ (a catholic working in an abortion clinic) is sent on a holy mission to stop the attempts of two fallen angels to enter back into heaven through a church loop hole. Despite disclaimers in the film it received a negative backlash from Christian audiences however is a relative success drawing appeal from its "jay & silent bob" fan base in particular. ...read more.