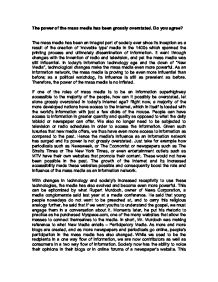 The power of the mass media has been grossly overstated.

The power of the mass media has been grossly overstated. Do you agree? The mass media has been an integral part of society ever since its inception as a result of the creation of 'movable type' media in the 1400s which spanned the printing process and ultimately dissemination of information. It went through changes with the invention of radio and television, and yet the mass media was still influential. In today's information technology age and the down of "New Media", technological changes make the mass media even more powerful. As an information network, the mass media is proving to be even more influential than before; as a political watchdog, its influence is still as prevalent as before. Therefore, the power of the mass media is no inflated. If one of the roles of mass media is to be an information superhighway accessible to the majority of the people, how can it possibly be overstated, let alone grossly overstated in today's internet age? Right now, a majority of the more developed nations have access to the internet, which in itself is loaded with the world's information with just a few clicks of the mouse. ...read more.

While we used to be the recipients in a one way flow of information, we are now contributors as well as consumers in a two way flow of information. Society now has the ability to voice their opinions in their blogs or in online forums of a newspaper's website. This undeniably makes the media more powerful as an information network. An influx of opinions allows the media, as well as the people to have a broader view of issues. Such a phenomenon would be incomprehensible and deemed ludicrous if the internet had not flourished. Thus the power of the media is not grossly overstated. With the mass media's role as information network more powerful, its other role of being a political watchdog automatically becomes more powerful too. The role at which information travels now makes politicians increasingly wary of the media. One wrong move and the globe will be drawn to the actions of the politicians. His actions would be severely scrutinized. Take for example America's fiasco at Guantanamo Bay, the way the media worked to inform the world of the injustices taking place there was through a combination of old media- investigative journalism, and new media- highly developed information network. ...read more.

It is the barrage of opinions criticizing its censorship laws that forced China to loosen up. These critical opinions force the government to try and portray itself as a country that is slowly reforming. If it wants to garner more investments, China must show that it is receptive to public opinion. Therefore, the loosening up of China is its response to criticism, which is a consequence of the mass media. Hence the power of the media is not overstated as it is able to bring about changes in what was once a tightly controlled state. With the growth of the internet and its increased accessibility for every man in society, the face of mass media has changed. Armed with its evolved form and increased capabilities, new media is proving to be even more powerful than its predecessor. This information network is spreading across the world at such a rapid rate that it would be naive to label it as being overstated. In fact, with such changes plentiful in the mass media, we should deem New Media as being just another step in what is the mass media's continual ascension to greater power and influence which was started by the creation of print media in the 1400s. ...read more.