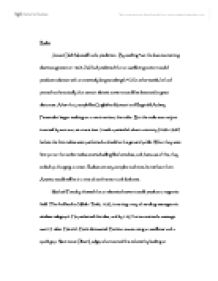 Radio James Clerk Maxwell had a prediction. By working "out the laws concerning electromagnetism in 1865, [he] had predicted that an oscillating current would produce radiation with an extremely long wavelength." (1) In other words, he had proved mathematically that certain electric currents could be detected at great distances. After that, people like Guglielmo Marconi and Reginald Aubrey Fessenden began working on a new invention; the radio. But the radio was not just invented by one man, or at one time. It took a period of about a century (1864-1960) before the first radios were perfected and sold to the general public. When they were first put on the market radios started selling like hotcakes, and, because of this, they ended up changing a nation. Radios are very complex machines, but without them America would still be in a time of confinement and darkness. Michael Faraday showed that an electrical current could produce a magnetic field. This find lead to Nikola Tesla, 1893, inventing a way of sending messages via wireless telegraph. He perfected this idea, and by 1897 he transmitted a message over 25 miles. Heinrich Hertz discovered Hertzian waves using an oscillator and a spark gap. Next came Oliver Lodge, who invented the coherer by looking at Edouard Branly's discovery that metal powders cohered to one another and putting them to practice. Lodge only used the coherer to make the transmission clearer as he was know to be a perfectionist. ...read more.

Live jazz bands were hired, and singers would improvise songs over the air. Interviews were going on, and people were now hearing the ideas of leading scientists, or the greatest politicians. This led to people becoming more educated. For those that didn't like to listen to the informative channels, sports were being transmitted to eager fans. One of the earliest sports commentators was Graham McNamee, and every night families would eagerly invite him into their homes and wait for the results of a Notre Dame football game or of a Jack Dempsey heavyweight fight. All of a sudden people began to listen, and so more people began to talk. The radio also gave a feeling of reassurance. During the 1920's, President Roosevelt would talk over the radio to comfort American's, and to talk about the depression. This was stunning, as most people had not heard the President's voice before, and the people of America's hearts filled with hope and pride to be in such an amazing country. In 1924, the Democratic National Convention, in which they nominated Al Smith as its Presidential candidate, boosted radio sales. This was quite a big thing, as in a time of depression when money was scarce people bought radios! Radios were a means of giving relief to America. As the depression was happening, business saw a way to boost their businesses. Airtime was being bought left and right, and the first jingles were being invented. ...read more.

The Olympic is the only ship we have heard say, "Going to the assistance of the Titanic. The others must be a long way from the Titanic." 1-45 a.m. Last signals heard from Titanic by Carpathia, "Come as quickly as possible old man: the engine-room is filling up to the boilers" 1-45 a.m. Mount Temple hears Frankfurt calling Titanic. No reply. 1-47 a.m. Caronia hears Titanic though signals unreadable still 1-48 a.m. Asian heard Titanic call SOS Asian answers Titanic but receives no answer. DFT (Frankfurt) calls Titanic and says, "What is the matter with you?" 1-50 a.m. Titanic says to Frankfurt "You fool, stdbi and keep out" Caronia hears Frankfurt working to Titanic. Frankfurt according to position 172 miles from MGY (Titanic) at time first SOS sent out. 1-55 a.m. Cape Race says to Virginian "we have not heard Titanic for about half an hour. His power may be gone." 2-10 a.m. Virginian hears 2 v's signaled faintly in spark similar to Titanic's 2-17 a.m. Virginian hears Titanic, call CQ (call to all ships) , but unable to read him. Titanic's signals end very abruptly as (if) power suddenly switched off. 2-17 a.m. Virginian Called Titanic and suggested he should try emergency set, but heard no response 2-20 a.m. Virginian to Olympic,"have you heard anything about Titanic" Olympic says, "No. Keeping strict watch, but hear nothing more from Titanic. No reply from him" about 2-20 a.m. This was the official time the Titanic foundered in 41.46 N. 50.14 W. as given by the Carpathia in message to the Olympic. The Effects of Radio on Society Mr. ...read more.