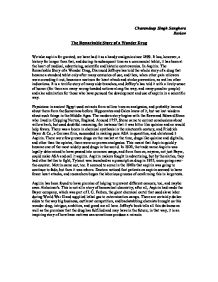 The Remarkable Story of a Wonder Drug

Charandeep Singh Sanghera Review The Remarkable Story of a Wonder Drug We take aspirin for granted; we have had it as a handy analgesic since 1899. It has, however, a history far longer than that, and during its subsequent time as a commercial tablet, it has been at the heart of medical, advertising, scientific and historic controversies. In Aspirin: The Remarkable Story of a Wonder Drug, Diarmuid Jeffreys has told the whole story of a drug that became a standard tablet only after many centuries of use, and then, when other pain relievers were crowding it out, became a nostrum for heart attack and stroke prevention, as well as other indications. ...read more.

The modern story begins with the Reverend Edward Stone who lived in Chipping Norton, England. Around 1757, Stone came to correct conclusions about willow bark, but used doubtful reasoning, for instance that it was bitter like quinine and so would help fevers. There was a boom in chemical synthesis in the nineteenth century, and Friedrich Bayer & Co., a German firm, succeeded in making pure ASA in quantities, and christened it Aspirin. There were few proven drugs on the market at the time, drugs like quinine and digitalis, and other than the opiates, there were no proven analgesics. This meant that Aspirin quickly became one of the most widely used drugs in the world. ...read more.

Aspirin has been found to have promise of helping to prevent different cancers, too, and maybe even Alzheimer's. This is not all a story of benevolent chemistry; after all, Aspirin had made the Bayer company, which was part of I. G. Farben, the giant chemical cartel that used slave labor during World War II and supplied lethal gas to extermination camps. There are certainly darker sides to the way big business, cutthroat competition, and backstabbing chemists brought us this wonder drug; intrigue, ambition, and greed are all here. Jeffrey's book tells all this darkness as well as the promises that the drug has fulfilled and may have in the future; in that way, it is an inspiring story of how base motives can sometimes produce a miracle. ...read more.