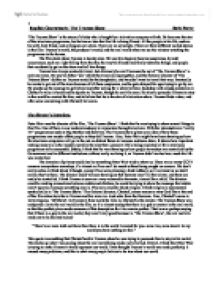 English Coursework- The Truman Show Beth Parry 'The Truman Show' is the story of a baby who is bought by a television company at birth. He becomes the star of the television programme, but he has no idea that his life is being filmed. All the people in his life, such as his wife, best friend, and colleagues are actors. There are no set scripts. There are three different worlds shown in the film: Truman's world, the producer's world, and the real world when we see the viewers watching the programme in the homes. The film starts when Truman is twenty-nine. We see him begin to become suspicious, by odd occurrences, such as a light falling from the sky, the way his friends and family advertise things, and people that accidentally get on the show and tell him things. Truman has always wanted to travel, but obviously he can't because the set of 'The Truman Show' is only one town. He saw his father 'die' whilst they were sailing together, and the fictional director of 'The Truman Show' did this so Truman would be thalassophobic, and wouldn't want to travel that way. Eventually he wants to get out of the town because of all these suspicions, and he gets delayed for ages trying to go by car. He plucks up the courage to go by boat and after sailing for a while he hits a backdrop with clouds painted on it. Christof's voice is heard and he speaks to Truman, though he can't be seen. He tries to persuade Truman to stay in the world he created for him, and tells him that he is the star of a television show. Truman finds a door, and after some conversing with Christof, he leaves. The director's intentions Peter Weir was the director of the film, 'The Truman Show'. I think that he was trying to show several things in this film. ...read more.

It's very sombre. There are lots of large television screens all around the room and everything is hi-tech. It's a complete contrast to Truman's world in the way that everything is so modern here and not in Truman's world. I think this world is supposed to symbolise the modern world of businesses and the stress it causes. This is another difference to Truman's unstressed, relaxed, laid back life, and I think this was done for a reason. It shows us more obviously how Truman's world is unrealistic and how the real world is becoming more and more like the production team's world all the time. All the team wear very dark clothes, with the expressions to match. We don't see what kind of lives they live outside their work, but I think that they don't have very fulfilled ones, as they are too wrapped up in their jobs. The audience's world We only see short clips every now and again of the audience's world. These are the people watching The Truman Show. We see several different situations when people are watching the programme. One of them is in the bath, one is working in a pub, and another situation is two security men. We see some old women with Truman's face on their cushions, gawping at their television screens, and also some shots of Sylvia, the girl that Truman was looking for. We never see anything more in this world than just people staring at their television screens. The camera angles are always the same, almost as if the camera is in the television. I think this is so we can see the expressions on their faces, and realise how much attention they are paying to the television and not to real life. We are given the impression that the types of people that watch The Truman Show are very boring people that need to follow someone else's life to fulfil their own. ...read more.

This is one of Truman's little catchphrases, and I think when he says this, it has a huge effect and impact on the situation. It shows us that Truman is definitely not weak and vulnerable any more. I think it is a nice way of saying "f*#@ you!" Also, this phrase is a very happy, jolly, and kind phrase, so it shows us that Truman is a really polite man, and that he tries to be happy in the worst of situations. This shows his bravery and strength. He walks out of the door, and the music changes from very moving and depressing to a lively tune. It almost brings the film back to life. It's also like a wake up call for Truman, telling him that things are going to be different, but better. As the music changes to the lively tune, we see Sylvia running out of her flat, suggesting that she is going to meet Truman. During the whole of this sequence, we see shots of the audience in front of their televisions, watching Truman. We see several different situations of people viewing, such as a busy pub all watching, the two old ladies, the security guards, the man in the bath, and Sylvia. We also see shots from the producers control room, so in this last sequence we see from all of the three worlds that we se at different stages in the film. Up until now, the different worlds are shown, but they're quite spaced out in the film. In this last sequence, we see them a lot more regularly, instead of just Truman's. It almost seems that we see from the audience more to show that Truman is going to be in that world soon. People from the different worlds are coming together, because Truman's left, and the production team will all be out of jobs. This is important because there is a lot in the film saying that the real world is a bad place, but in the end it's where we all come from, and where we all belong. 1 ...read more.