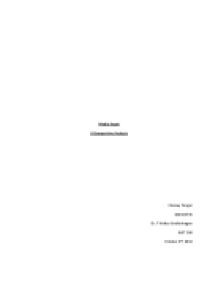 The two articles for comparison are Google will not remove anti-Islam film from YouTube following White House request for review ,published on September 15th, 2012 from FoxNews.com, and from CTVnews.ca, published September 16th

﻿Media Study A Comparitive Analysis Chelsey Fonger 200321736 Dr. F Volker Greifenhagen RLST 100 October 4th, 2012 Comparative Media Analysis Those in the business of media publishing have an extremely delicate job. No matter what you publish, someone will agree, while others will read in disgust, or simply not care. Writers for newspapers and news outlets have a densely diverse crowd of people to please, all wanting to hear about the latest drama, violence and worldly decisions happening in their home towns, and around the globe, while touching on certain topics, and staying clear of others. Religion is often a touchy subject when being presented to the public eye. If we lived in a world of nontheistic readers, journalists would have a much easier job, but unfortunately, the human race is chalk full of opinionated people, who have their own pre-set ideas about religion in all its forms. In comparing these pieces of journalism we can separate words of judgement and true fact, revealing the opinionated societies of the world. The two articles up for comparison are titled ?Google will not remove anti-Islam film from YouTube following White House request for review? ,published on September 15th, 2012 from FoxNews.com, and from CTVnews.ca, the very same story was published September 16th, titled ?Google refuses to take down anti-Muslim clip?. ...read more.

The situation being explained is defined at a ?refusal? by some parts, resulting in ?restrictions? for others, which again gives a negative outlook on the rest of the article to follow. Unlike the first article, the opening in this piece does not use specific names of countries being restricted; it instead uses the clever word play of ?certain countries?, to avoid offending anyone. The violence that has resulted because of Google?s choices is not exactly defined in the title or opening, but is instead foreshadowed by the use of words like ?restricting? and ?anti-Muslim?, which both suggest a negative vibe, that will be explained later in the article. Language The language used in both articles is extremely negative, with the words ?refuses?, ?raging?, and ?restricted? being repeated several times. These words are just the tip of the ice berg that, which reveals more use of strong, harsh words and sentences regarding YouTube?s ?standards? and ?guidelines? for uploading videos. There are not so much stereotypes made in either article, but more so generalizations of groups of people and their actions. As we have previously discussed, using the term ?Middle East? to describe the Muslim citizens in Egypt, India, Libya and surrounding countries is neither correct or polite. ...read more.

The constraints on the foxnews.com article followed these guidelines. The writer was very opinionated, and made sure to place all comments made by American political figures in a positive light. These constraints somewhat revolved around the political party of the United States, and Google?s opinions on the matter. As far as economic restraints go, no matter which way the story is sold, controversy will be made, and the story will sell, so there was not much of a constraint in that area. Impact The coverage from these two articles has mixed attitudes towards religion. They avoid the topic of religion, while making sure that it is seen as a serious subject. The fact that there is no ?religious? section on any of these news sites even more expresses the awkwardness publishers feel when talking about the subject of religion and religious controversies and scandals. The story itself suggests that competing religions bring nothing but problems, and while most religions are about keeping the peace and worshiping God?s will, the people of these articles are not acting peaceful, and are creating a false illusion of what religion really is, which is highlighted in news media articles like these two. Religion is not supposed to be about competing to be superior and engaging in violence, yet a reader would assume so after reading pieces like these. ...read more.