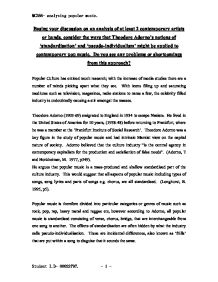 Theodore Adorno's notions of 'standardisation' and 'pseudo-individualism' might be applied to contemporary pop music - Do you see any problems or shortcomings from this approach?

Basing your discussion on an analysis of at least 2 contemporary artists or bands, consider the ways that Theodore Adorno's notions of 'standardisation' and 'pseudo-individualism' might be applied to contemporary pop music. Do you see any problems or shortcomings from this approach? Popular Culture has enticed much research; with the increase of media studies there are a number of minds picking apart what they see. With icons filing up and saturating mediums such as television, magazines, radio stations to name a few, the celebrity filled industry is undoubtedly causing a stir amongst the masses. Theodore Adorno (1903-69) emigrated to England in 1934 to escape Nazism. He lived in the United States of America for 10 years, (1938-48) before returning to Frankfurt, where he was a member at the 'Frankfurt Institute of Social Research'. Theodore Adorno was a key figure in the study of popular music and had intrinsic Marxist view on the capital nature of society. Adorno believed that the culture industry "is the central agency in contemporary capitalism for the production and satisfaction of false needs". (Adorno, T and Horkheimer, M. 1977, p349). He argues that popular music is a mass-produced and shallow standardised part of the culture industry. This would suggest that all aspects of popular music including types of songs, song lyrics and parts of songs e.g. ...read more.

Although his writings was published in 1941, his accounts on popular music does not account for the complexities of recent popular music and popular culture. He is heavily criticised due to his unchanging elitist views and it would be fair to say that popular music is not as monolithic as Adorno claims. The perspectives offer a relevant but quite pessimistic and what can be considered as narrow minded views of popular music. They have offered foundations for interpretation and understanding of music however many theories since have built on how audiences' contextualise and use the products of mass culture rather than what the culture industry does to the audience. Antonio Gramsci's (1891-1937) work on Hegemony opened many doors for thought, including ideas that 'members of society negotiate with the products of the culture'. (Fiske, J. 1992, p309). Hegemony helps identify that popular culture is not simply imposed on the subordinates by the bourgeoisie and that people are not simply "passive and helpless mass incapable of discrimination and thus at the economic, cultural and political mercy of the barons of the industry". (Fiske, J. 1987, p309) Fiske suggests that audiences draw contrasting ideas from different text. Madonna is a fine example where pleasure of the audience is in the "power of a severely suboridatly subculture to make their own statements and own meaning". ...read more.

(Rolling stone 508 March 28th 1989). On the other hand, the power of Madonna is undoubtedly clear, her vast empire of her Production Company, her own music label and a net value of 600 Million speaks volumes about her nature as a business women as well as an artist and social figure. It is fair to say that that although popular music in today's generation can be considered as standardized, and to a great extent, manufactured music will always be so, Adorno's views are out of date and biased as he had a very low opinion of popular music. Being a musician himself, his opinions were based on his own assumptions of high and low culture and although he did make some substantial claims about standardization and pseudo individualization, popular music today has more important factors to be dealt with such as the messages it is portraying. One being that we do live in a consumerist society where essentially everything is a product, even classical music today, which Adorno would have considered high art is now commercialized and used as a commodity to sell through advertising. Through it all music captures a moment or feeling that Adorno does not account for. Music is another form of expressing an emotion whether it is classical or pop music and it is there for enjoyment, to provide a service and an option to listen to whatever pleases the ear. ...read more.

***** This is an excellent essay. It is written in an academic register and is thoroughly researched, using a range of apt academic quotations, correctly referenced. The only issue is that the title stipulates that TWO artists must be discussed. The section on One True Voice is much shorted than the one on Madonna - it may be good to try to say a bit more about One True Voice.