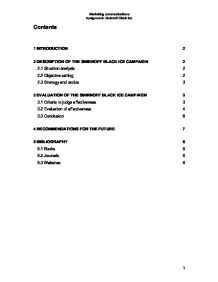 This report aims to review and evaluate this new campaign and the effectiveness of Diageo's marketing communication mix. Recommendations as to how this mix should be developed over the next 12 month period will also be given.

Contents 1 INTRODUCTION 3 2 DESCRIPTION OF THE SMIRNOFF BLACK ICE CAMPAIGN 3 2.1 Situation analysis 3 2.2 Objective setting 3 2.3 Strategy and tactics 4 3 EVALUATION OF THE SMIRNOFF BLACK ICE CAMPAIGN 4 3.1 Criteria to judge effectiveness 4 3.2 Evaluation of effectiveness 5 3.3 Conclusion 7 4 RECOMMENDATIONS FOR THE FUTURE 8 5 BIBLIOGRAPHY 9 5.1 Books 9 5.2 Journals 9 5.3 Websites 9 1 Introduction Diageo has recently axed their long-running and highly successful advertising campaign for Smirnoff Black Ice and are now investing an estimated � 7 million to relaunch the product with a new packaging design and new taste. This report aims to review and evaluate this new campaign and the effectiveness of Diageo's marketing communication mix. Recommendations as to how this mix should be developed over the next 12 month period will also be given. 2 Description of the Smirnoff Black Ice campaign 2.1 Situation analysis The sales of flavoured alcoholic beverages (referred to as FAB from now on) such as Smirnoff Black Ice, have over the last year showed a great annual increase. Experts believe that one of the main reasons for this is that innovative marketing has made these products trendy. According to Datamonitor, Smirnoff Black Ice and its parent brand Smirnoff Ice has been the main success story of the UK market, but figures show that recently Diageo has been losing share in the FAB market to producers of alcopops such as Bacardi Breezer and the VK range. ...read more.

This should result in Diageo retaining consumers as well as win over new ones, which means increased market share and therefore reaching business objectives. (b) Changing behaviour Once again, this criterion will be based on the pre-tests, as it is too early to say whether this campaign has changed behaviour. One of Diageo's objectives was to change the attitudes of men to alcopops, and based on the results of the pre-tests, they have a good chance of doing so. The tests showed that a high percentage of men, in particular young men, preferred Smirnoff Black Ice to other alcopops in terms of taste and image. Figures also showed that many would now choose to drink Smirnoff Black Ice instead of other alcoholic beverages as well, not just alcopops. The focus group also responded in a positive way to the advertising, saying that it was refreshing to see an alcopop campaign using men. (c) Strategic impact Because of competitive pressures and legal restrictions associated with the alcoholic beverage industry, Diageo has to be bold in its strategy. Advertising has previously proved to be the key to unlock the strategic goal of increasing market share. Because the infrastructure is in place for this campaign, most of the increase in sales will become increase in profits. (d) Media impact Diageo has not taken advantage of the fact that they have created a new flavour that stands out from all the sweet and fruity alcopops currently on the market. ...read more.

The television adverts would be backed up with a similar communication mix as the current campaign, as this has shown to be effective. With a campaign like this, Diageo would have to adapt a push strategy as well in order to convince drinking establishments to serve these cocktails. The campaign could also include a competition encouraging the public to create there own cocktails using Smirnoff Black Ice. If successful, this would increase sales. A strategy like this would also create the opportunity of incorporating Smirnoff Black Ice's parent brands Smirnoff Ice and Smirnoff. With Diageo being an international and highly successful company, the best way of setting the promotional budget would be with the objective and task method. As far as the time-scale is concerned, the following would be an appropriate calendar: Month 1: Press release to the trade press and retailers. Month 2: Sales campaign to persuade drinking establishments to serve Smirnoff Black Ice cocktails, as well as persuading retailers to stock the product. An aim will be sat to get a certain per cent of retailers to stock the product. Month 3/4: Denouement of teaser campaign. Promotion staff will appear in larger drinking establishments offering samples and money-off coupons. Press releases to trade magazines. Month 5/6: Once the target for retail penetration has occurred, start TV and press advertising. A few months on Diageo should begin a new campaign reinforcing the brand as well as well as reviewing the effectiveness of the previous one. It is important to remember that although this campaign is only spread over 6 months, there will have been extensive preparation in advance. ...read more.