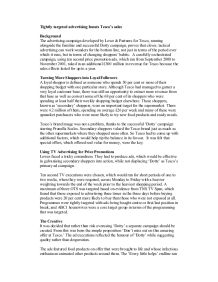 Tightly targeted advertising boosts Tesco's sales Background The advertising campaign developed by Lowe & Partners for Tesco, running alongside the familiar and successful Dotty campaign, proves that clever, tactical advertising can work wonders for the bottom line, not just in terms of the period over which it runs, but in terms of changing shoppers' habits. A carefully orchestrated campaign, using ten second price promotion ads, which ran from September 2000 to November 2001, raked in an additional �300 million in revenue for Tesco because the sales effects lasted for up to a year. Turning More Shoppers into Loyal Followers A loyal shopper is defined as someone who spends 50 per cent or more of their shopping budget with one particular store. Although Tesco had managed to garner a very loyal customer base, there was still an opportunity to extract more revenue from that base as well as convert some of the 68 per cent of its shoppers who were spending at least half their weekly shopping budget elsewhere. These shoppers, known as 'secondary' shoppers, were an important target for the supermarket. There were 4.2 million of them, spending on average �26 per week and many of these were upmarket purchasers who were more likely to try new food products and ready meals. Tesco's brand image was not a problem, thanks to the successful 'Dotty' campaign starring Prunella Scales. Secondary shoppers valued the Tesco brand just as much as the other supermarkets where they shopped more often. So Tesco had to come up with additional factors, which would help tip the balance in its favour. It was felt that special offers, which offered real value for money, were the key. ...read more.

The company envisaged that it would be able to transfer its unassailable position on the high street into the media environment, emulating the experience of Wal-Mart, which has made a success of selling screen space in the US. Apparently convinced of its ability to lure advertising budgets away from traditional advertising media, Tesco hired JCDecaux to oversee sales on the channel. Less than two years later, the reality has proved rather different, with some agencies and advertisers refusing to buy into Tesco TV. Even the supermarket itself is giving it only qualified support. 'Tesco TV is still in development, having been in-store for only 18 months,' says a Tesco spokesman. 'It is popular with customers and many of our smaller suppliers, who could not normally afford to reach so many consumers through traditional advertising.' The mention of 'smaller suppliers' is significant, suggesting that bigger clients have largely turned their backs on the format. Indeed, JCDecaux insiders claim the bulk of its revenue comes from direct deals with advertisers, rather than agencies or outdoor specialists. Stunted development Tesco, which orginally said it would install plasma screens in 300 of its biggest stores, has long since halted the planned roll-out at just 100. JCDecaux, meanwhile, has been forced to slash its rate-card prices, after advertiser response proved less than overwhelming. So what has gone wrong? According to Chris O'Donnell, managing director of OneZeroOne, the digital division of outdoor specialist Kinetic, the answer lies in a range of areas, not least Tesco's arrogance. What he finds of most concern is that some of the inevitable teething problems surrounding Tesco TV's launch are yet to be resolved. O'Donnell claims the first, and most fundamental problem, was that Tesco and JCDecaux treated the in-store screens as if they were a TV medium in their own right. ...read more.

Tesco was told not to repeat the claim unless it could provide further substantial evidence to support it. Tesco also said in the leaflet that "control of weeds and enrichment of the land is achieved through skillful use of crop rotation and natural composts ..." but this too was challenged by the complainant, who said that other methods such as flame throwers and mechanised hoes were widely used in organic farming. Once again, the ASA agreed. Tesco claimed that crop rotation was the sole method of weed control for many crops, and that mechanical hoes were a secondary method of weed control and were no different from manual hoes. The ASA said that the claim implied control of weeds and enrichment of the land was achieved by skilful use of crop rotation and natural composts alone; the Basic Standards for Organic Agriculture and Processing, set out by the International Federation of Organic Agriculture Movements, encourage the use of natural composts and rotation of non-perennial crops, but also recommend using physical and thermic measures of crop protection such as pheromone traps or thermic weed control. However, the complaint that Tesco's claim that organic food was kinder to the environment was also misleading was not upheld by the ASA. The University of Hohenheim study also stated that, in comparison with conventional farming, organic farming benefited wildlife conservation and the landscape, caused less nitrate leaching, eliminated the risk that ground water would be contaminated with synthetic pesticides and consumed less artificial energy and produced less carbon dioxide. While Tesco had not taken the effect of transporting the produce into account, the ASA agreed that it had shown sufficient evidence to prove that the claim was correct. ...read more.