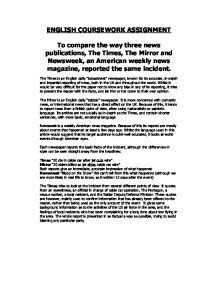 To compare the way three news publications, The Times, The Mirror and Newsweek, an American weekly news magazine, reported the same incident.

ENGLISH COURSEWORK ASSIGNMENT To compare the way three news publications, The Times, The Mirror and Newsweek, an American weekly news magazine, reported the same incident. The Times is an English daily "broadsheet" newspaper, known for its accurate, in-depth and impartial reporting of news, both in the UK and throughout the world. Whilst it would be very difficult for the paper not to show any bias in any of its reporting, it tries to present the reader with the facts, and let him or her come to their own opinion. The Mirror is an English daily "tabloid" newspaper. It is more concerned with domestic news, or international news that has a direct effect on the UK. Because of this, it tends to report news from a British point of view, often using nationalistic or patriotic language. Its articles are not usually as in-depth as the Times, and contain shorter sentences, with more basic, emotional language. Newsweek is a weekly American news magazine. Because of this its reports are mostly about events that happened at least a few days ago. Whilst the language used in this article would suggest that its target audience is quite well educated, it looks at world events through American eyes. Each newspaper reports the basic facts of the incident, although the differences in style can be seen straight away from the headlines: Times "20 die in cable car after jet cuts wire" Mirror "20 skiers killed as jet slices cable car wire" Both reports give an immediate, accurate impression of what happened Newsweek "Blood on the Snow" We can't tell from this what happened (although we are more likely in real life to know, as it written 12 days after the event) ...read more.

Instead of falling or plunging to the ground, the car is described as "tumbling". This word is often used to describe something comical or childish. The fact that it was a "yellow gondola" that tumbled, and that it was full of "skiers" (as opposed to people) again tries to divert the readers attention away from the seriousness of what happened - (most people in America probably only think of a gondola as something found on a canal in Venice, they can't imagine it falling to the ground from the side of a mountain). Although this may technically be a correct way to describe a cable car, it is an attempt to reduce the impact of the sentence. It talks of villagers having "griped" about the jets for years. The use of this word, rather than "complained", or "protested", for example, makes it sound like they were less justified in doing so. It's the sort of word that you would use to try and dismiss something far less serious, like your neighbour claiming that your baby had kept him awake because of its crying. There is also an attempt to move the blame for the accident away from the US to the Italian authorities. The commander of the air base is quoted as saying that his pilots "fly the routes they lay out", although the paper feels that it also has to mention that the US Ambassador "finally conceded that the plane was flying below the minimum approved altitude". This is one of the few occasions when the Newsweek article contains anything which could be considered damaging to the US case. ...read more.

duty to write about this, but if we do so in this way, maybe people won't pay much attention to the article, and turn the page quickly". I wonder what approach the paper would have taken if any American lives had been lost? There is nothing in the way that this article has been written which encourages the reader to read it, whereas the two British papers have the opposite effect on the reader. I think that The Times report gives by far the best overall summary, as it deals not only with the accident itself, but also goes into more detail about the background as to why it happened, and the US Air Force operations in Italy. However, if you are looking for a report that brings home the horror of the incident itself, then you have to say that The Mirror does this most effectively. For all the criticism that the tabloid press receives about the lack of quality journalism, and the use of sensational language, there is no doubt in my mind that The Mirror's report appeals more immediately to the readers sense of sadness at what happened. I suppose that ideally, you would read The Mirror article first, for the "knee-jerk reaction" of what happened, and then read The Times for the more considered, overall view. Newsweek cannot really be considered in the same context as either of the two British newspapers in terms of reporting the accident or bringing home the full horror. It reports no more than is absolutely necessary to set the scene for its real purpose, that of defending the actions of America. ...read more.