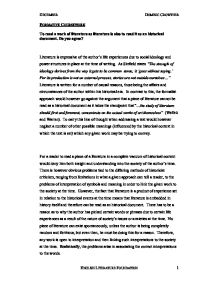 To read a work of literature as literature is also to read it as an historical document. Do you agree?

FORMATIVE COURSEWORK To read a work of literature as literature is also to read it as an historical document. Do you agree? Literature is expressive of the author's life experiences due to social ideology and power structures in place at the time of writing. As Sinfield states "The strength of ideology derives from the way it gets to be common sense; it 'goes without saying.' For its production is not an external process, stories are not outside ourselves..." Literature is written for a number of causal reasons, those being the affairs and circumstances of the author within his historical era. In contrast to this, the formalist approach would however go against the argument that a piece of literature cannot be read as a historical document as it takes the standpoint that"...the study of literature should first and foremost, concentrate on the actual works of art themselves" (Wellek and Warren). To carry this line of thought when addressing a text would however neglect a number of other possible meanings (influenced by the historical context in which the text is set) which any given work may be trying to convey. For a reader to read a piece of a literature in a complete vacuum of historical context would deny him both insight and understanding into the society of the author's time. There is however obvious problems tied to the differing methods of historicist criticism, ranging from limitations in what a given approach can tell a ...read more.

Old historicism does however help to bring a text more narrowly into perspective, enabling the reader (in most cases) to attribute more refined and suitable symbolic meaning to a text. On its own, the method of giving immediate background knowledge may be limited, but it does allow the process of reading literature as a historical document to be carried further into the realms of "new historicism", where it is argued that the best framework for interpreting literature is in relation to contemporary issues and anxieties. Considering a text from such a viewpoint engages the reader to think about "the struggles that the text reflects, refracts, and tries to work through" (Warren Hedges), thereby opening up new avenues of meaning and inference on behalf of the reader. Any piece of literature which causes the audience to pose questions about the society at the time, invoking thoughts and theories on the ideologies and maybe even the politics set in place in the novel is an indication that the text is being read not only as literature but also as a historical document. However, it has been argued that the most prominent downside to the alternative method of new historicism can reduce literature to a mere footnote history, ignoring some of the finer unique qualities of the work itself. We as an audience occupying our own current society naturally attempt extrapolate our experiences to those set out in a text, in order to rationalise and make sense of the text itself. ...read more.

If one is trying to read a text as a historical document, it is worthwhile bearing this formalism approach in mind, because it may serve to form the piece of literature into something other than a document useful to a reader as information to the past. Not only that, but the author may be trying to be so original in his defamiliarisation that it is almost impossible to attribute any accurate or reliable internalised meaning of imagery with which to judge and interpret the work as a historical document. To read a piece of literature as literature is also to read it as a historical document. No matter the approach be it formalist or historicist, literature is written due reasons being associated with the author, and the events and circumstances surrounding them. Even if they have ulterior motives, or there is a cloud of mystery surrounding their lives, or when the text was written, even if they are attempting to defamiliarise the audience to the extent that the text seems so alien, it is nearly impossible to interpret, literature is always conveying something the society at the time. In a lot of cases however, this statement is not without problems. The literature as a historical document is problematic mainly because despite literature being somehow (no matter how obscurely) representative of society at the time, there is always the factor of subjectivity which will change the opinions of differing readers, often causing them to contradict and disagree with one another, making literature to pin down as a definite historical document very difficult. ...read more.