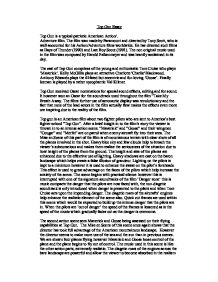 Top Gun Essay Top Gun is a typical patriotic American Action/. Adventure film. The film was made by Paramount and directed by Tony Scott, who is well accounted for his Action/Adventure films worldwide. He has directed such films as Days of Thunder (1990) and Last Boy Scout (1991). The non original music used in the film was composed by Harold Falkenmeyer and was heavily acclaimed in its day. The cast of Top Gun comprises of the young and enthusiastic Tom Cruise who plays 'Maverick'. Kelly McGillis plays an attractive Charlotte 'Charlie' Blackwood. Anthony Edwards plays the ill fated but eccentric and fun loving 'Goose'. Finally Iceman is played by a rather sycophantic Val Kilmer. Top Gun received Oscar nominations for special sound effects, editing and for sound. It however won an Oscar for the soundtrack used throughout the film "Take My Breath Away. The films further use of aeronautic display was revolutionary and the fact that none of the lead actors in the film actually flew makes the effects even more ore inspiring due to the reality of the film. Top gun is an American film about two fighter pilots who are sent to America's best fighter school "Top Gun". After a brief insight in to the film's story the viewer is thrown in to an intense action scene. ...read more.

The music used in this scene is like the other action parts, extremely realistic. The diagetic roars of the engines across the bare landscape are powerful and allow the viewer to become absorbed in the realism of sound created by them. The non-diagetic music of the scene enforces what happens through out the scene. As danger begins to creep the signature tune of Top Gun begins and reaches climax when the plane spins erratically out of control and both Maverick and Goose eject from the plane. The tone of the music after this is of a much more different state. Goose is badly injured and so the tone of the music is lowered and slows down. The camera angles used in this scene are extremely enthralling. A rotational camera movement is used when the plane is out of control which shows how frantic the situation they are faced with. Maverick is usually very good at controlling the aircraft, however he takes control of the aircraft later in the scene and so retains his hero status. A close up is first used to help to educate the viewer on what has happend to Goose. The camera then gradually pans out with a high angle shot which then moves in to a very long shot which exposes both Maverick and Goose in the empty landscape which makes the viewer feel emotionally for the two characters as Maverick although wants to desperately help cannot as he is completely helpless in that situation. ...read more.

Editing of this scene is done to perfection. As with the other scenes there is swift cut editing like the other scenes this happens although doesn't really come in to full effect until Tom Cruise is in the air. When Maverick is called up to assist the desperate situation the camera just follows him as he walks to the jet, a slow motion effect is also used, which truly polishes his hero prominence. This also helps us to realise that the next scene is important to Maverick and to the film. There are close-ups of the engines lighting up when Maverick is seated and ready to fly off which promotes the power and strength both emotionally and mentally of Maverick and the plane. There finally is also an extreme close up of Goose's chain which emphasises the personal dilemma that he is going through. The rapid diagetic instructions from base help to add to the confusion and suspense of the scene when Maverick is not flying. In the final scene it is important to note that the signature track only begins playing when Maverick joins the other pilots in the sky, this helps the viewer to realise that he is truly the hero and the situation ill be resolved as he is there. ?? ?? ?? ?? ...read more.

There is no conclusion to this essay. It hardly qualifies as an essay because basically all it is is three fairly similar analyses of the three key flying sequences in the film.

This is a pity, because to compare and contrast these three sequences is actually quite a clever way to look at the film: it would allow the author to point out how and why the audience experiences each of the scenes very differently. It's because, even though the scenes are quite similar, our knowledge of Maverick is different each time, and so our attitude to events changes.

What's needed is conclusion that assesses what changes and what remains the same in each scene, and give a brief account of how the flying sequences are used to illustrate Maverick's process of growing up from a spoiled egotistical individualistic flyboy into a genuinely virtuoso pilot and valued member of a team. I might also want to discuss why this kind of story is very common in patriotic propaganda, which aims to tie young (usually male) individuals who are "like Maverick" to an ideal or institution that is "greater than themselves"...