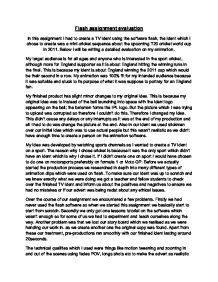 In this assignment I had to create a TV ident using the software flash, the ident which I chose to create was a mini cricket sequence about the upcoming T20 cricket world cup in 2011. Below I will be writing a detailed evaluation on my animation.

My target audience is for all ages and anyone who is interested in the sport cricket, although more for England supporter as it is about England hitting the winning runs in the final. This is because my ident is about England winning the 2011 cup which would be their second in a row. My animation was 100% fit for my intended audience because it was suitable and stuck to its purpose of what it was suppose to portray for an England fan.

My finished product has slight minor changes to my original idea. This is because my original idea was to instead of the ball launching into space with the ident logo appearing on the ball; the batsman forms the IPL logo. But the picture which I was trying to upload was corrupted so therefore I couldn’t do this. Therefore I changed my idea. This didn’t cause any delays or any interrupts as it was at the end of my production and all I had to do was change the picture at the end. Also in our ident we used stickmen over our initial idea which was to use actual people but this wasn’t realistic as we didn’t have enough time to create a person on the animation software.

My idea was developed by watching sports channels as I wanted to create a TV ident on a sport. The reason why I chose cricket is because it was the only sport which didn’t have an ident which is why I chose it. If I didn’t create one on sport I would have chosen to do one on motorsports preferably on formula 1 or Moto GP. Before we actually started the production process we researched in depth into many different types of animation clips which were used on flash. To make sure our ident was up to scratch and we knew exactly what we were doing we got a teacher and fellow students to check over the finished TV ident and inform us about the positives and negatives to ensure we had no mistakes or if our advert was being racist about any ethical issues.

Over the course of our assignment we encountered a few problems. Firstly we had never used the flash software so when we started this assignment we basically start to start from scratch. Secondly we only got one lessons tutorial on the software which wasn’t enough so for some of us we had to experiment and teach ourselves along the way. Another problem was that we lost our story board which we realised as we were handing our work in. as we create another one the original copy was found. Apart from these our treatment, pre-productions ran smoothly with our finished ident lasting around 20seconds.

The technical qualities which I used were things like motion tweaning and zooming in and out of the scenes using fades POV, longs shots etc to make the advert as realistic as possible. For our finished product I think we did very well our teacher told us that the standard of which we produced is far better than their A level media class.  I used these to create a series of images to create a movie so that I could create my advertisement. Our management as a group working together was very efficient. We all did our parts which we were assigned to and were very happy with each other’s inputs. As beginners using the software I am very happy with the finished product and as or work progressed we got more and more familiar with the software.