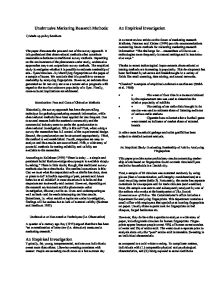 Unobtrusive Marketing Research Methods: 1) Made up policy brochure The paper discusses the pros and con of the survey approach. It is hypothesized that observational methods often constitute reasonable substitutes to traditional survey methods. Depending on the environment of the phenomena under study, unobtrusive approaches may even outperform survey methods. The empirical study investigates whether it is possible to estimate readership of ads - flyers/circulars - by identifying fingerprints on the pages of a sample of issues. We conclude that it is possible to measure readership by analyzing fingerprints. However, an estimate thus generated so far can only serve as a conservative prognosis with regard to the true but unknown popularity of a flyer. Finally, cross-cultural implications are addressed. Introduction: Pros and Cons of Obtrusive Methods Historically, the survey approach has been the prevailing technique for gathering marketing research information, while observational methods have been applied far less frequent. Due to several reasons both the academic community and the commercial industry seem to prefer the questionnaire to observational investigation. Why is this so? First, when using a survey the researcher has full control of the experimental design. Second, the questionnaire can be structured appropriately. Third, the method is well-established. Fourth, responses are easy to analyze and thus results are soon at hand. Fifth, a wide array of powerful methods for testing reliability and validity are available to the researcher. According to Kellehear (1993) "There is today ... a simple and persistent belief that knowledge about people is available simply by asking." There is little doubt, though, that traditional survey methods also have drawbacks. ...read more.

Furthermore, the frequency of identified fingerprints varies inversely with the number of pages of the individual trade circular: Most fingerprints will be found on the first pages as compared to the last ones. Nevertheless it is reasonable to assume that the person who has left a few fingerprints, say, on the first four pages indeed has been flipping through the whole circular - although no traces are to be found on the remaining 28 pages. For methodological reasons the front and rear page of each circular were excluded from analysis since they may have been touched (contaminated) by the messenger (an errand boy on a bike) or by the person of the household who brought the circular to the recycling center. Unlike his wife (her husband), there is a chance that he (she) himself (herself) never read it. The study reported on here is a pilot study and is part of a far more comprehensive project being under preparation. The purpose of the pilot study has been to generate knowledge and experience concerning the measurement of fingerprints on circulars. Table 1 displays the findings of the analysis of fingerprints with regard to five non-randomly selected respondents. ID-numbers 01/02, 03/04, 05/06, 07/08 and 09/10 refer to the same respondent, respectively. Each respondent was exposed to two circulars. Person 01/02 refers to one of the authors. 01 was read immediately after spending 20 minutes in a sauna. 02 was studied after having walked around for 20 minutes outside a Helsinki hotel in early January only wearing a T-shirt (-10oC). The supposition that a person generates more sweat and thus more finger-imprints when he sweats as compared to when he freezes, was confirmed. ...read more.

Everything else being equal we assume that unobtrusive methods are less sensitive to cultural peculiarities than survey methods. The rationale behind this argument is that observational methods are not dependent on the accuracy and believability of human communication. It is well documented that survey-respondents often do not provide valid responses due to a set of reasons (see above). If differences in the cultural frame of reference between two countries are detected, then it is at least probable that these differences affect the way respondents percept the communication "imbedded" in the questionnaire. Comprehensive studies by Segall, Campbell, and Herskovits (1966) and Hall (1976) indicate that many problems in international research are caused by simple misunderstandings in the process of cross-cultural communication. As a matter of fact this potential source of error does not at all appear if a cross-cultural study is based on sheer observation. A fingerprint in, say, Mexico, is compatible to a fingerprint in Denmark and Japan. However, it is fair to assume - so far unproven, though - that it will be easier to detect fingerprints in countries near the equator as compared to countries north of the polar circle. That is simply because people sweat when it is very hot while they do not sweat much when it is cold and when they freeze. Therefore, compatible respondents may generate different frequencies of fingerprints due to differences in climate and temperature. But if two countries have almost the same climate and the study is carried out under comparable conditions (i.e. analysis of selected popular supermarket flyers) then one should assume that cross-cultural differences in the amount of identified fingerprints reflect differences in readership of the involved circulars. Once more: Everything else being equal. ...read more.