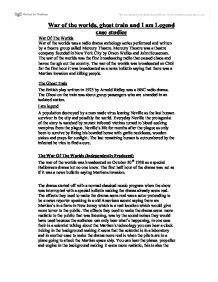 War Of The Worlds

War Of The Worlds War of the worlds was a radio drama anthology series performed and written by a theatre group called Mercury Theatre. Mercury Theatre was a theatre company founded in New York City by Orson Welles and John Houseman. The war of the worlds was the first broadcasting radio that caused chaos and havoc though out the country. The war of the worlds was broadcasted on CBS for the first hour it was broadcasted as a news bulletin saying that there was a Martian invasion and killing people. The Ghost Train The British play written in 1923 by Arnold Ridley was a BBC radio drama. The Ghost on the train was about group passengers who are stranded in an isolated station. I am legend A population destroyed by a man made virus leaving Neville as the last human survivor in the city and possibly the world. Everyday Neville the protagonist of the story is watched by mutant infected victims turned to blood sucking vampires from the plague. Neville's life for months after the plague as only been to survive by fixing his boarded home with garlic necklaces, wooden stakes and prays for sunlight. ...read more.

The use of different locations such as one attack in a farm another in the air would give more fear to the public and interviews as well makes the story seems real with actors acting to be witnesses of the Martian space craft. When the Martians first attack you can also hear alarms, people screaming and gunshots from the humans and laser sound effects from the Martians weapons in the background. The type of narrative style used in the war of the worlds is represented with each different character. Each character that spoke in the drama had a role such as the farmer where the Martians landed he had a Texas cow boy accent and was speaking in a hurry voice giving the effect to the audience that he was nervous and worried about what was going on, also with the news filed reporter at the scene of the Martians landing area. He was speaking in a calmly till the Martians started to attack the humans around them. I Am Legend (BBC Radio Drama) I am legend is narrated by a single narrator throughout the nine chapters of the radio drama. ...read more.

At the start of documentary when the first nightfall comes in the story there is a certain vampire that calls Neville'said name every night. The audience understands that these two characters know each other but how and later on in the story you learn that Ben Cortmen the vampire that calls for Neville every night is Neville's neighbor before the plague. The use of description helps the audience understand, feel more engaged in the story and get a better idea of what's the environment like. The narrator describes every motion and every detail in each scene to make sure the audience can follow and not get lost. How the audiences learn to care about Neville is the description of the suffering he goes though every day; the plug in ears to cut out the noise that comes from out side, the lost of his family, how time is so slow, the vampire women outside making noises and having to fix his home every single night. ?? ?? ?? ?? War of the worlds, ghost train and I am Legend case studies ...read more.