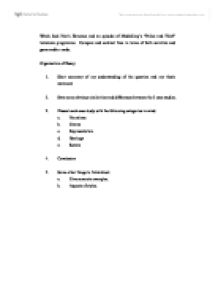 Watch Jack Neo's Homerun and an episode of MediaCorp's &quot;Police and Thief&quot; television programme. Compare and contrast then in terms of both narrative and genre and/or mode.

Watch Jack Neo's Homerun and an episode of MediaCorp's "Police and Thief" television programme. Compare and contrast then in terms of both narrative and genre and/or mode. Organisation of Essay: 1. Short summary of my understanding of the question and my thesis statement 2. State some obvious similarities and differences between the 2 case studies. 3. Dissect each case study with the following categories in mind: a. Narratives b. Genres c. Representation d. Ideology e. Scenes 4. Conclusion 5. Some other things to think about: a. Give concrete examples. b. Aspects of styles. These two shows are very Singaporean. By this I mean that they contain many elements which are unique to my country, elements which only within the paradigm of our society will resonate with local viewers. Homerun, an Asian remake of the internationally acclaimed Iranian movie Children of Heaven is a movie directed by Jack Neo, who is a local celebrity best known for his comedic prowess and the many comedy shows under his name. Police and Thief is a relatively new weekly half-hour sitcom shown on Channel 5 which has yet to set a foothold in the heart of local audiences. ...read more.

Kiat Kun has no idea how the shoes had mysteriously disappeared and hence his sister Seow Fang too. In this scene alone, a beautiful play on camera angle suffices to keep us in suspense till much later in the show. This seemingly passing top down close up scene of the gnarled hands removing the shoes helps to tug hard at our heart strings when we later realize the rag-and-bone man is blind. The above is a good example of how both restricted and unrestricted narration can be developed from one scene. We know who had taken away the shoes (unrestricted narration) but like the characters in the show we have no idea he was blind (restricted narration). These two shows belong to the 2 commonest genres in Singapore. Police and Thief can be classified as belonging to the "HDB" genre. In fact this plot of this particular sitcom revolves around the conflict faced by two men who live in close proximity. It has an appeal particular to local viewers who are able to appreciate the familiar settings. One example which we can relate to is the scene of Lily, Tok Kong's wife who repeats a punch line in a scene where her face is framed in the center of our common older HDB window panes. ...read more.

This is perhaps the director's ideology portraying the way Malaysia hordes over us in the water issue. The premise of Homerun revolved around three things: shoes, intelligence and power being associated with wealth. Jack Neo parodies the socio-political situation between Singapore and Malaysia using the three elements with shoes being the water, Singapore being the more intelligent country and power that Malaysia holds over us due to their superior water resource. The two shows end differently too. The end of the sitcom is close without answered questions while the cryptic ending of Homerun leaves us pondering what the director would have us think as we leave the cinema. There is no element of suspense left in Police and Thief to entice the audience to look out for the next episode, unlike a soap opera. Even as both shows make use of our experience to enhance our appreciation and understanding of the shows, they obviously use several different techniques and some similar ones to bring forth the essence of each individual story. These different methods highlight certain elements essential to the plot of the stories and ultimately help us to enjoy the shows as Singaporeans. Word Count: 1512 ?? ?? ?? ?? ...read more.