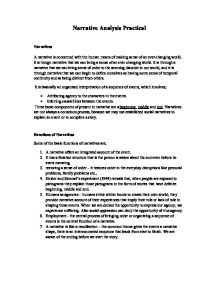 We were asked to interpret the movie El Arbole Seco meaning The Dry/Withered Tree, to help us understand narrative analysis.

Narrative Analysis Practical Narratives A narrative is concerned with the human means of making sense of an ever-changing world. It is trough narrative that we can bring a sense of an ever changing world. It is through a narrative that we can bring sense of order to the seeming disorder in our world, and it is through narrative that we can begin to define ourselves as having some sense of temporal continuity and as being distinct from others. It is basically an organized interpretation of a sequence of events, which involves; * Attributing agency to the characters in the events. * Inferring causal links between the events. Three basic components of present in narrative are a beginning, middle and end. Narratives are not always a conscious process, because we may use established social narratives to explain an event or to complete a story. Functions of Narratives Some of the basic functions of narratives are; 1. A narrative offers an integrated account of the event. 2. It has a finished structure that is the person is aware about the end even before he starts narrating. 3. restoring a sense of order - it restores order in the everyday disruptions like personal problems, family problems etc., 4. Heider and Simmel's experiment (1944) reveals that, when people are exposed to pictograms they explain those pictograms in the form of stories that have definite beginning, middle and end. 5. Humans as agencies - humans strive within bonds to create their own world; they provide narrative account of their experiences that imply their role or lack of role in shaping these events. When we are denied the opportunity to express our agency, we experience suffering. Also social oppression can deny the opportunity of true agency. 6. Employment - the central process of bringing order or organizing a sequence of events is the central function of a narrative. 7. ...read more.

Happiness is to be able to be joyous. Evidence from the Movie: 1. Towards the ending where the tree is getting watered by the pipeline that gets burst because of the bull-dozer. 2. The last scene where an apple, a flower grows on the tree and the apple falls in his hands. * Bonding with the tree- The child in this movie seemed to share a special bond with the tree next to his house. Evidence from the Movie: 1. The initial scene where the boy is shown playing under the tree; the focus of the frame for the shot was also on the tree and the boy. 2. When the boy tries to water the tree for the very first time, but unfortunately the water finishes in the watering pot and he does not know what to do and sits there under the tree till dusk. 3. After the watering pot gets crushed, he sits under the tree with the crushed watering pot beside him. 4. Also in the scene where the builders have come to destroy their houses, the boy seems to be more worried of not being able to water the tree rather than losing a house and is sitting under the tree. * Surprise: It is when we are taken aback because we experience something that we were not expecting. Surprises can be pleasant and unpleasant both. Evidence from the Movie: 1. The ending scene where the tree is getting watered by the pipeline that gets burst because of the bull-dozer. 2. One another scene showing surprise is one in which the mom is surprised to see a flower and an apple grow on the withered tree and she comes out of the car. * Hope and persistence: hope is being optimistic, keeping a positive approach to something. Believing that if something has ended badly, then, it is not the end. ...read more.

Epilogue I could actually relate to this movie which revolves around a 5 year old boy. It talks about hope, efforts, obstacles, disappointments, persistence and finally achieving your aim. It is a happy story which is woven in thread of optimism. According to me, it says that it is your hard work which gets paid off which matters actually in the end. It is not the obstacle, problems, disappointments which matters it is your hard word, your persistence that matters. Different episodes of this movie symbolize these aspects. The aspect of emptiness in movie showcases the difficult moments of life. I could recall the darkness that I had gone through after completing bachelor degree. Here in the movie the ray of hope was the only green leaf on the dried apple tree. It is the hope that forces a person to make efforts so as to make situations better and favourable. Through that moment, the ray of hope that I experience was given by my teacher. But as it shown that once the child thought to water the plant, he confronts many problems in his way and similarly following this hope was difficult for me as it was not a cake walk to get admission into a course of one's choice. When you confronts obstacle, it is very much possible that you fail but at this moment it is important to persist you efforts. In the movie also child fails many a times in watering the tree but he made efforts persistently. And finally in the end, he gets rewarded by the tree in a form of apple. Similarly I got through the course of my choice and felt rewarded after making my lot of efforts to get in. So in the end I would say that it is important to be optimistic enough to see and follow the ray of hope but it is your hard work and continuous efforts that make you an achiever. And without it, you can't even get an apple!! ...read more.