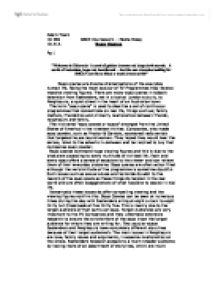 &quot;Welcome to Eldorado: A coast of golden dreams and deep dark secrets - A world of hedonism, hope and heartbreak - And the sun drenched setting for BBC1s' new three times a week drama serial&quot;.

Adam Tkacz 10 JSB GSCE Coursework - Media Essay 10 A1A Soap Operas Pg 1 "Welcome to Eldorado: A coast of golden dreams and deep dark secrets. A world of hedonism, hope and heartbreak - And the sun drenched setting for BBC1s' new three times a week drama serial" Soap operas are diverse dramatisations of the everyday human life. Being the most popular of TV Programmes they receive massive viewing figures. There are many soap operas in today's television from Eastenders, set in a typical London suburb, to Neighbours, a quiet street in the heart of an Australian town. The term "soap opera" is used to describe a set of continuous programmes that concentrate on real life, things such as; family matters, friendships and primarily relationships between friends, neighbours and family. The nickname "soap operas or soaps" emerged from the United States of America in the nineteen thirties. Companies, who made soap powder, such as Proctor & Gamble, sponsored radio serials that targeted house bound women. They hoped they would hear the serials, listen to the adverts in-between and be inspired to buy that companies soap powder. Soap operas command huge viewing figures and this is due to the producers appealing to every multitude of civilised life. Each and every soap offers a sense of escapism to the viewer and can relieve them of their everyday problems. Soap operas are often action filled although the verisimilitude of the programme is sometime doubtful. Such issues such as sexual abuse and homicide do add to the realism of the soap opera as these things do happen in the real world and are often exaggerations of what happens to people in real life. Remarkably these issues do offer compelling viewing and the viewing figures confirm this. Soap Operas can be seen at numerous times during the day with Eastenders airing at eight o clock to eight thirty but Crossroads at five thirty five. ...read more.

Extradition is when an accused person must be handed over back to the country were they committed the crime. In other soap operas topical issues have been much more serious, things such as drug addictions, gambling addiction and many involve rape. In Coronation Street, Toyah Battersby was raped and Sarah Lou who met someone on an Internet chat line and he was a paedophile. Eastenders featured a massive storyline when a member of the cast was shot, Phil Mitchell, and it nearly turned into a whodunit. Topical issues offer compelling viewing which are nitty-gritty but always follow the law and are morally right. Much of the interest in any soap opera rests on the characters and what is happening to them. A regular character may only be on screen for a few minutes therefore they need to be easily recognisable. Having certain types of character helps this; they are stereotypical of people in real life society. Often the chosen character is exaggerated but in most soaps we find a playboy, rich businessman, tart/flirt, moaner, gossips, hard guy, do gooders, young fool and this is exemplified in the first episode of Eldorado. We see a wide-range of characters, Marcus Tandy the playboy, businessman, and hard guy. Blair the young fool taking money from Marcus Tandy. We have Trish the tart/flirt with her young toy boy Dieter who is just as much a tart and a flirt. Adam Tkacz 10 JSB GSCE Coursework - Media Essay 10 A1A Soap Operas Pg 5 Stereotypes are evident in all other soaps too, Pauline Fowler is a huge gossip, Little Mo is a do gooder, never doing anything wrong or to hurt anyone and there is the just nice people like Harold Bishop from Neighbours. Soap operas need a vast cast to maintain storylines many characters will be immensely exaggerated but this is so people can relate easier and they are usually based on normal people however there are some unusual people in soap operas, for instance Sarah Lou, from Coronation Street, she is a young girl of 16/17. ...read more.

When we were given this coursework I wasn't looking forward to it, I had never really enjoyed soap operas and to write and essay about one that was a complete failure, I knew it would be a challenge. When we watched the first episode of Eldorado I was appalled myself, I thought the acting was very wooden and some of the storylines were completely ridiculous, for example Gwen, Drew and the uncooked chicken and they needed to be a bit more "gritty". Since the hardest hitting storyline was Marcus Tandy being extradited, although the need for these hard hitting storylines may have been due to the target audience and air time. For the first episode of it did a good job of introducing the characters but a few more Spanish characters would have improved it a little bit. Adam Tkacz 10 JSB GSCE Coursework - Media Essay 10 A1A Soap Operas Pg 8 The camerawork in it was excellent and after watching Eldorado and writing this essay it showed me how subtle camera shots are but can influence a person's opinion on allsorts. The acting and writing seemed a bit amateur but it was a whole new soap opera so maybe they have an excuse. As I said earlier this Coursework has drastically effected my opinion of soap operas in general, there must be a lot of hard work put into to create a soap opera and make sure that all the storylines link. My main dispute with all soap operas is the accuracy of the things that happen to the characters, I think in Emmerdale alone there have been over 5 murders/deaths and 20 plus fires in one small country village. Now I understand more about soap operas I enjoy them more on the television, looking out for links in the camera work and telling my family what's what and so my opinion of soap operas is one of high admiration and I believe they are realistic programmes on the everyday life. ...read more.